The Mustang Boss 302 is a high-performance variant of the Ford Mustang originally produced by Ford in 1969 and 1970, alongside its more powerful sibling the Boss 429 Mustang. Ford revived the name for another two year production run in 2012 and 2013. It was produced for the Trans Am racing series.

The Camaro/Mustang rivalry had begun in 1967 with the introduction of the Chevrolet Camaro by General Motors. The Camaro was the largest threat to the lead Ford had in the "pony car" field, a market segment largely created by Ford with the introduction of the Mustang in mid-year 1964. The performance of the Mustang with 289 and 390 engines was not up to the Camaro, with its small block and big block V8. In an effort to improve the Mustang's image Ford made a 428 Cobra Jet V8 and a Ford Boss 302 engine optional for the 1968 mid-year and 1969 models, respectively.

The 1969–70 Boss 302 (Hi-Po) engine was created in 1968 for the SCCA's 1969 Trans-Am road racing series. Available in the Boss 302 Mustangs of 1969–70, it's a unique Ford small-block engine featuring a thin-wall, high nickel content block casting. It differed substantially from regular 302s, with 4-bolt mains, screw in freeze plugs, and heads using a canted valve design being developed for the planned 351 Cleveland (which debuted the following year). The construction was aided by the two engines sharing a cylinder head bolt pattern, though the Boss 302 heads had to have their coolant passages slightly modified.

This optional engine, and indeed the entire vehicle package, including handling and aerodynamic aids, was made available for the express purpose of meeting the homologation guidelines to compete in the SCCA Trans-Am series, which limited engine displacement to 305 C.I.D. (5.0L) in order to compete. The Boss 429 Mustang was born in a similar way, except with the intent of homologating Ford's new "semi-HEMI" 429 C.I.D. (7.0L) engine (to race in NASCAR, instead of Trans Am). The much larger engine in the Boss 429 reflects the less restrictive engine displacement limits of NASCAR at the time.

The Boss 302 Mustang was designed by Larry Shinoda, a former GM employee. The car featured a reflective "c-stripe". The fake air scoops in the rear quarter panel fenders of the regular production 1969 Mustangs were eliminated on the Boss 302 models. A black horizontal rear window shade and a blackout hood were both options. It was one of the first production models with a front spoiler and rear deck wing. The name "Boss" came about when Shinoda was asked what project he was working on, he answered "the boss's car" because the project was a secret. Also Shinoda had called it the "Boss" as an homage to the new President of Ford Semon "Bunkie" Knudson who had brought Shinoda over from GM's Chevrolet Division after Knudson had left.

In 1967, after winning the 24 Hours of Le Mans together with A. J. Foyt, Gurney spontaneously sprayed champagne while celebrating on the podium, which thereafter became a custom at many motorsports events. As owner of All American Racers, he was the first to put a simple right-angle extension on the upper trailing edge of the rear wing. This device, called a Gurney flap, increases downforce and, if well designed, imposes only a relatively small increase in aerodynamic drag. At the 1968 German Grand Prix, he became the first driver ever to use a full face helmet in Grand Prix racing. 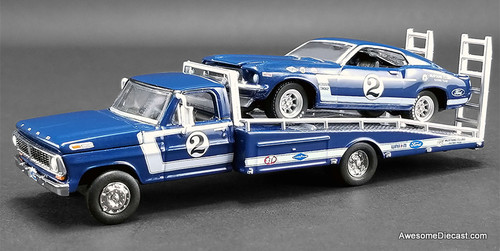