It is part of an estate sale, the model is in brand new condition but the box is showing little signs of shelf wear

The Chevrolet Impala is a full-size car built by Chevrolet for model years 1958 to 1985, 1994 to 1996, and 2000 onward. The Impala is Chevrolet's popular flagship passenger car and is generally among the better selling American made automobiles in the United States.

In 2000, the Impala was reintroduced again as a mainstream front-wheel drive car. As of February 2014, the 2014 Impala ranked #1 among Affordable Large Cars in U.S. News & World Report's rankings. When the tenth generation of the Impala was introduced for the 2014 model year, the ninth generation was rebadged as the Impala Limited and sold only to fleet customers through 2016. During that time both versions were sold in the United States and Canada. The current-generation Impala is also sold in the Middle East, China, and South Korea.

For the 2010 model year, the Impala was the only GM W-body car in production, although the eight-cylinder SS model was discontinued. LT models included fog lights and once again offered an optional Luxury Edition package. The 3.9 L V6 was no longer available for the LT model. Three new exterior colors were available: Summit White, Cyber Gray Metallic, and Aqua Blue Metallic, and four exterior colors were deleted. The (PDG) convenience package, AM/FM stereo with 6-disc in-dash CD changer, and trunk cargo net were no longer available. The Impala emblems on rear sail panels as well as the rear decklid badge on LS models were deleted. Early 2010 models had the lower front-side GM badges but were also later deleted.

Anthony Wayne Stewart (born May 20, 1971), nicknamed Smoke, is an American former professional stock car racing driver and current NASCAR team owner. He is a three-time Monster Energy NASCAR Cup Series champion as a driver, winning titles in 2002, 2005 and 2011. As a team owner, he has won Monster Energy Cup titles in 2011 with himself and in 2014 with Kevin Harvick as drivers. Throughout his racing career, Stewart has won racing titles in Indy, midget, sprint, and USAC Silver Crown cars. He is the only driver in history to win a championship in both IndyCar and NASCAR.

He last competed full-time in the NASCAR Sprint Cup Series (now known as the Monster Energy NASCAR Cup Series) during the 2016 season, driving the No. 14 Chevrolet SS for his own team, Stewart-Haas Racing, under crew chief Mike Bugarewicz. From 1999 to 2008, he drove the No. 20 Joe Gibbs Racing car, under crew chief Greg Zipadelli with The Home Depot as the primary sponsor. While driving for car owner Joe Gibbs, Stewart won two Cup Series championships in 2002 and 2005. In 2011, Stewart became the first owner-driver since Alan Kulwicki to win the Cup Series championship, which ended Jimmie Johnson's streak of consecutive championships at five. Stewart is the only driver to win the Cup Series championship under the old points system and the chase playoff format, and is the only driver to win the title under three different sponsorships (Winston in 2002, Nextel in 2005, and Sprint in 2011). He is also the first driver in the Cup Series to win the championship by virtue of a tie breaker (number of wins during the season is the first level tie breaker; Stewart had five while eventual runner-up Carl Edwards had one.) On May 22, 2019, Stewart was inducted into the NASCAR Hall Of Fame. 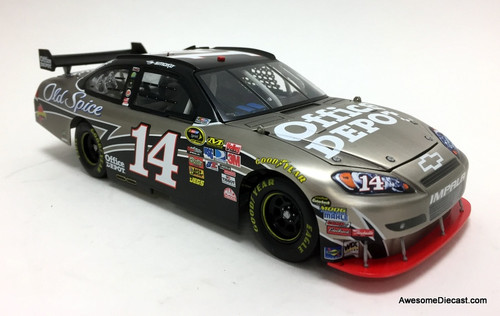