The Plymouth Road Runner is a mid-size car with a focus on performance built by Plymouth in the United States between 1968 and 1980. By 1968, some of the original muscle cars were moving away from their roots as relatively cheap, fast cars as they gained features and increased in price. Plymouth developed the Road Runner to market a lower priced, basic trim model to its upscale GTX.

Plymouth paid $50,000 to Warner Bros.-Seven Arts to use the Road Runner name and likeness from their Wile E. Coyote and the Road Runner cartoons (as well as a "beep, beep" horn, which Plymouth paid $10,000 to develop). The Road Runner was based on the Chrysler B platform (the same as the Belvedere and Satellite), as a back-to-basics mid-size performance car.

The 1969 model kept the same basic look, but with slight changes to the taillights and grille, side marker lights, optional bucket seats, and new Road Runner decals. The Road Runner added a convertible option for 1969 with 2,128 such models produced that year. All were 383 cu in (6.3 L) engine cars, except for ten which were equipped with a 426 cu in (7.0 L) Hemi.

An Air Grabber option (N96 code) was introduced this year; it consisted of a fiberglass air duct assembly bolted to the underside of the hood that connected to twin rectangular upward-facing vents in the hood with rallye red vent screens. The fiberglass hood box had an "Air Grabber" sticker on the front. When the hood was closed, a rubber seal fitted over the large-oval unsilenced air cleaner. A decal with Wile E. Coyote saying "Coyote Duster" was on the air cleaner lid. The assembly ducted air directly into the engine. The vents in the hood could be opened and closed via a lever under the dashboard labeled "Carb Air."

The 383 engine was standard with the 426 Hemi the only option available for the Road Runner until mid-year production. The 383 was marketed as the "383 Road Runner" engine. 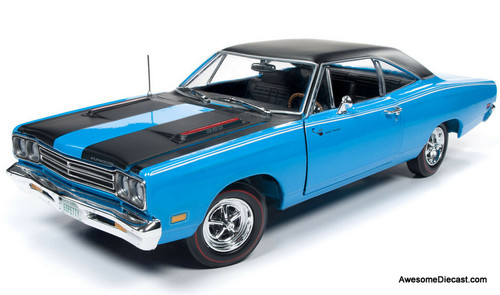