In 1951, Sweden was the home of 28-year-old Sigvard Berggren. Like many of his contemporaries, he was interested in what life in the future would look like, particularly in what autos would look like years in the future and started to create an auto based upon his own futuristic vision.

The basis for his creation was a 1938 Dodge chassis originally used on a taxi. The frame was a suitable basis for the modifications that were required. Berggren and his assistant, Lennart Josefson, welded a tubular structure made from lightweight steel tube, inspired by contemporary aircraft construction. The framework served also as a protective roll cage in the event of an accident or rollover. In this instance, Berggren’s idea was the initial realization of a “safety car”. Shaped body panels were fitted over the steel structure and the created body design was reminiscent of a, as a Swedish journalist once wrote, “wingless aircraft”. The cockpit in which the driver was seated protruded far beyond the front axle location and resembled the cockpits of military aircrafts. Air intakes fitted to each side, which provided cooling air to the 100 horsepower flathead Ford V-8 engine, highlighted this impression. The body shape proved to be an attraction wherever it traveled and soon the car became known outside of Swedish borders.

As often happens, once the “new” wore off of this amazing vehicle during the mid-fifties; due to numerous reportages and photos; the car lost its charm and even Berggren lost interest. Ultimately, the car was given to the Museum Svedinos in Ugglarp, Sweden. 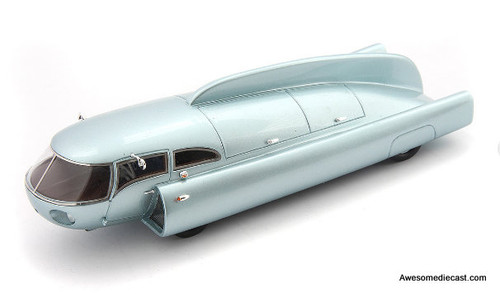