This is a limited model of only 333 pieces worldwide

The desire to combine a turbine with the power of a conventional combustion engine bothered the minds of several engineers in automotive history.

The spell of such a combination spread all around the world and in the first half of the 1950s also the Argentines Eugenio Grosovich and Gianfranco Bricci from the city Cordoba addressed themselves to the task. They went for a passenger car of the brand Justicialista to realize the image of their turbine-driven vehicle, named Aerocar. The chassis without the engine served as a substructure, the baroque body was removed as it did not fit the concept of both technicians. Without further ado they designed their own car body according to aerodynamical aspects. The rear of the new car body, most probably a fiberglass construction, was home to a V6 four-stroke engine of Chevrolet with an output of 90 hp. The former aircraft propeller had an impressive diameter of 1.75 meters. But it were not the potentially life-threatening consequences of an propeller hit that truly caused a stir in the streets of Buenos Aires, but rather the strong wind caused by the rotation of the propeller. During the presentation drive countless men, women and children lined the streets to see the new-fashioned vehicle in action. Consequences of the caused wind were flying hats and unintentionally lifted skirts. This funny as well as slightly awkward situation was the only thing that made a lasting impression on the spectators of the presentation drive.

The vehicle was not developed further and fell into oblivion after it was allegedly last seen with demounted propeller at a workshop in the small city La Falda in 1955. 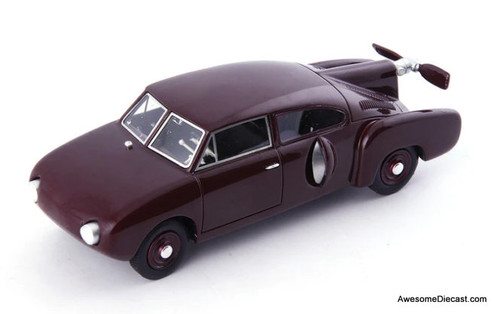