It was never a secret that the Soviets researched and developed a lot amidst the greatest secrecy in favor for a strategic advantage in military matters. In the course of years many prototypes, partly quite weird and most probably classified as top secret back-then, became public, which offer intersting insights of yesteryear.

Undoubtedly one of the weirdest protoypes was the GAZ 16A. Written out the abbreviation stood for 'Gorkowsky Awtomobilny Sawod' which loosely translated means 'Automobile Plant Gorki'. Founded already in 1932 the company served to manufacture trucks, passenger cars and special vehicles like amphibian vehicles. As with the beginning of the 1950s the East-West-conflict intesified GAZ got development jobs. In the beginning of the 1960s another vehicle class was added - air cushion vehicles or better known as hovercrafts. The engineers of GAZ had knowledge of the conceptual difficutlies of hovercrafts but still managed to design a harmonic car body for the new vehicle concept. Two propellers, one at the front and one at the rear of the vehicle,

The development and conception of air cushion vehicles challenged engineers all over the world, but in the end the economic success and the general success of this concept remained at a low level and was / is used in only a few areas. 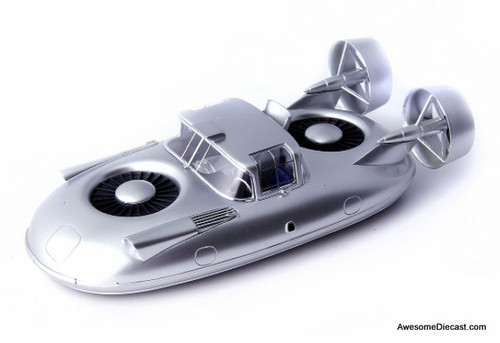