Mid of the 1960s, the public Ministry of Technology had set itself to inform the manufacturing industry about new production techniques, alternatives and about cost savings during the running production process. As the supreme authority considered a centrally organized meeting of all companies, which were spread throughout the whole British Isles, improbable, the Ministry decided to visit the companies and to inform the responsible managers with lectures and movies about the innovations and news of the market locally.

For this purpose, the Ministry of Technology ordered seven promotion trucks with trailers in 1967. The company Coventry Steel Caravans (CSC), a company that built up reputation within the camping scene with its camping trailers, won the bid. As base for the cinema on wheels served the chassis of the omnibus Type Bedford SB 3. The company CSC fitted the standard Bedford bus chassis with a completely new body work. On up to 24 seats the managers could watch the innovations of the economy on a cinema screen that was located at the rear end of the interior. The cinematic equipment was controlled from a Plexiglas dome above the driver’s cab. Inside the trailer several displays were fitted which gave complementary and additional information beyond the shown movies.

Overall seven Bedford truck-trailer combinations were on the roads across the United Kingdom between 1967 and 1974. The Ministry of Technology just acted as the initiator, the tour and the trainings were held by the company Production Engineering Research Association (PERA). 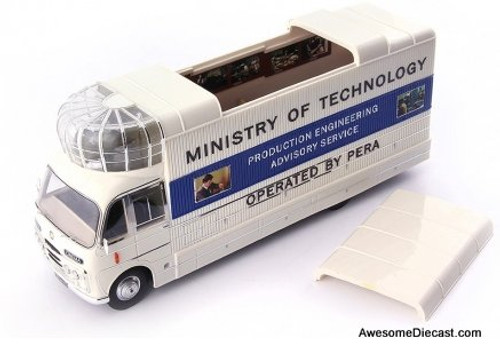