World travelers were considered heroes for decades, because they had mostly seen parts of the world that were never within reach for the ordinary citizen.

Two of these adventurers were the Czechoslovaks eng. Jio Hanzelka and eng. Miroslav Zikmund. In 1947, they decided to take a tour with a Tatra passenger car, which lasted three years and took them back to their homeland via Africa and South America. The world tour attracted great attention, especially in this period, which was still influenced by the privations of World War II. However, this journey was not enough for the two world travelers and five years after their return they planned a second trip. This time their world tour was to become even more extensive and lead over Asia, Australia and Oceania back to their Czechoslovak homeland. They went for the 1-ton Tatra 805 truck as their means of transport.

First and foremost, both adventurers went for this truck, which was designed purely according to military specifications, due to its enormous robustness. The truck was state-of-the-art at that time, as it had only been mass-produced since 1952. The 2,5-litre V8 drive of the Tatra engine T603 with 75 hp was sufficient for the world tour and allowed a top speed of 75 km/h.

On April 22, 1959, 39-year-old eng. Jia Hanzelka and the one year older eng. Miroslav Zikmound finally set off on their second big trip. This time their targets were in Eastern Europe, led to Asia, from where they eventually crossed over via Australia to various Pacific Islands. With the two Tatras T805, the two had made a first-class choice and returned to their home country from their extensive trip in 1964.

Both trucks were the first cars to cross the Soviet Union form east to west. 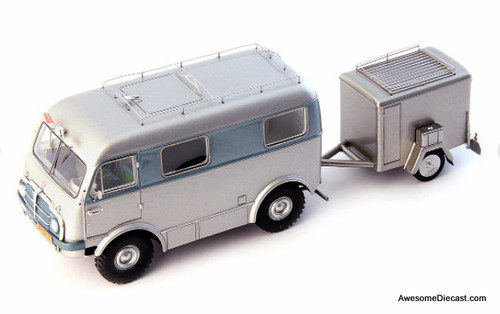