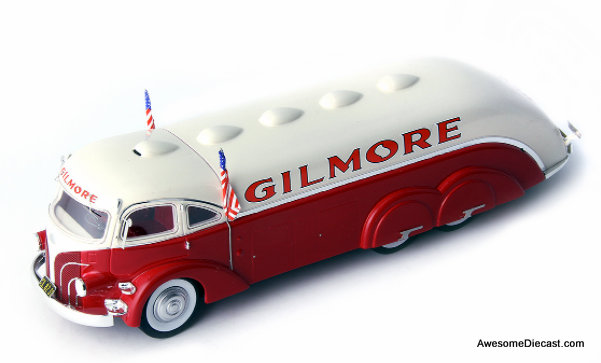 In the 1930s many American companies felt called to refresh their image with specially designed trucks. Additionally, these trucks attracted considerable attention and interest. The press willingly reported about these unique and beautiful trucks and also on the public the trucks made a positive impression.

One of these companies, which decided to modernize and replace its vehicle fleet, was the ‘Gilmore Oil Company’. Founded in 1903 and holding almost 3,500 gas stations the company was well-known on the West Coast of the USA. Around 1935 the desire to replace the conventional fuel tank trucks, which served to supply the gas stations with fuel, by more extravagant trucks emerged and the 48-year-old company owner Earl Bell Gilmore contacted the body maker ‘Advance Auto Body Works’.

The Designer Wellington Everett Miller created a new body and went for a Cab-Over-Engine design – or short COE, meaning that the driver’s cab was directly positioned over the front axle and also above the engine. Advantage of this design was the enlargement of the passenger compartment, by which the Gilmore driver’s cab offered space for four passengers. The overall roundish design merged over distinctive front fenders into the structure of the fuel tank and the clean silhouette ended in a round rear end. Noteworthy were also the tear-drop-shaped superstructures at the roof, which subtly covered the filling ports for the fuel and perfectly fit into the aerodynamic streamline shape of the truck. Likewise not harming the aerodynamical concept of the design was the almost covered twin rear axle of the car, which additionally gave the design a certain “solidness and strength” – as an article in a magazine stated.

This highly detailed resin model is 1 of only 500 produced world wide In 1950, 20-year-old Leo Lyons had a dream of building a custom car unlike any other – he would scratch-build it from the...

This is a limited edition model with only 333 pieces made world wide In 1959 two vehicles were built under the name 'Projet 900' at Renault, which had a very unusual design: It was simply the visual...

It took a couple of years until the US-American group General Motors sharped their idea of ​​a concept car, which went down in the US-American car history as the 'Club de Mer' in the year 1956. The...

This model is sold in a blister pack Pegaso was a Spanish manufacturer of trucks, omnibuses, tractors, armored vehicles, and, for a while, sports cars. The parent company, Enasa, was created in 1946...