The Lancia Stratos HF, widely and more simply known as Lancia Stratos, is a sports car and rally car made by Italian car manufacturer Lancia. The HF stands for High Fidelity. It was a very successful rally car, winning the World Rally Championship in 1974, 1975 and 1976; and race car winning 1974 Targa Florio, five times the Tour de France Automobile and three editions of Giro d'Italia automobilistico.

Lancia traditionally used the design house Pininfarina and had not used Bertone before. Bertone desired to create an opportunity for a relationship with Lancia and knew that Lancia was looking for a replacement for the aging Fulvia for use in rally sports. Bertone decided to design an eye-catching model to show to Lancia. Bertone used the running gear of a Fulvia Coupé which belonged to one of his friends and built a running model around it. When Bertone himself appeared at the Lancia factory gates with the Stratos Zero he passed underneath the barrier, to great applause from the Lancia workers. After that Lancia and Bertone agreed to develop a new rally car based on the ideas of Bertone's designer Marcello Gandini. Gandini had already designed the Lamborghini Miura and was working on the Countach at the time.

Lancia presented the Bertone-designed Lancia Stratos HF prototype at the 1971 Turin Motor Show, a year after the announcement of the Stratos Zero concept car. The prototype Stratos HF (Chassis 1240) was fluorescent red in colour and featured a distinctive crescent-shaped wrap-around windshield providing maximum forward visibility with almost no rear visibility. The prototype had three different engines in its early development life: the Lancia Fulvia engine, the Lancia Beta engine and finally, for the 1971 public launch, the mid-mounted Dino Ferrari V6 producing 190 hp (142 kW) in road trim. The use of this engine had been planned from the beginning of the project, but Enzo Ferrari was reluctant to sign off the use of this engine in a car he saw as a competitor to his own Dino V6. After the production of the Dino had ended, the "Commendatore" (a popular nickname for Enzo Ferrari) agreed to deliver the engines for the Stratos, upon which Lancia suddenly received 500 units.

The Stratos was a successful rally car during the 1970s and early 1980s. It started a new era in rallying as it was the first car designed from scratch for this kind of competition. The three leading men behind the entire rallying project were Lancia team manager Cesare Fiorio, British racer/engineer Mike Parkes and factory rally driver Sandro Munari, with Bertone's Designer Marcello Gandini taking a personal interest in designing and producing the bodywork. A dedicated calculations engineer from Lancia was tasked with performing calculations on many of the chassis, steering, suspension and engine components: Nicola Materazzi.

Lancia undertook extensive testing with the Stratos and raced the car in several racing events where Group 5 prototypes were allowed during the 1972 and 1973 seasons. Production of the 500 cars required for homologation in Group 4 commenced in 1973 and the Stratos was homologated for the 1974 World Rally Championship season. The Ferrari Dino V6 engine was phased out in 1974, but 500 engines - among the last examples built - were delivered to Lancia. Production ended in 1975, when it was thought that only 492 were made (for the 1976 season, the Group 4 production requirement was reduced to 400 in 24 months). The manufacturer of the car was Bertone in Turin, with final assembly by Lancia at the Chivasso plant. Powered by the Dino 2.4 L V6 engine that was also fitted to the rallying versions, but in a lower state of tune, it resulted in a power output of 190 PS; 188 bhp (140 kW) at 7,000 rpm and 226 N⋅m; 166 lbf⋅ft (23 kg⋅m) at 4,000 rpm of torque, giving the road car a 0–100 km/h (62 mph) time of 6.8 seconds, and a top speed of 232 km/h (144 mph). The car was sold as the Lancia Stratos HF Stradale. 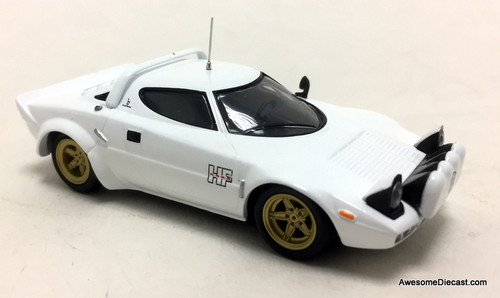