The Ford Cortina is a car that was built by Ford of Britain in various guises from 1962 to 1982, and was the United Kingdom's best-selling car of the 1970s.

The Cortina was produced in five generations (Mark I through to Mark V, although officially the last one was only the Cortina 80 facelift of the Mk IV) from 1962 until 1982. From 1970 onward, it was almost identical to the German-market Ford Taunus (being built on the same platform) which was originally a different car model. This was part of a Ford attempt to unify its European operations. By 1976, when the revised Taunus was launched, the Cortina was identical. The new Taunus/Cortina used the doors and some panels from the 1970 Taunus. It was replaced in 1982 by the Ford Sierra. In Asia and Australasia, it was replaced by the Mazda 626–based Ford Telstar, though Ford New Zealand did import British-made CKD kits of the Ford Sierra estate for local assembly from 1984.

The name was inspired by the name of the Italian ski resort Cortina d'Ampezzo, site of the 1956 Winter Olympics. As a publicity stunt, several Cortinas were driven down the Cortina olympic bobsled run at the resort which was called Cortina Auto-Bobbing.

Using the project name of "Archbishop", management at Ford of Britain in Dagenham created a family-sized car which they could sell in large numbers. The chief designer was Roy Brown Jr., the designer of the Edsel, who had been banished to Dagenham following the failure of that car. The Cortina, aimed at buyers of the Morris Oxford Farina and Vauxhall Victor, was launched on 20 September 1962. The car was designed to be economical, cheap to run and easy and inexpensive to produce in Britain. The front-wheel drive configuration used by Ford of Germany for the new Ford Taunus P4, a similarly sized model, was rejected in favour of traditional rear-wheel drive layout. Originally to be called Ford Consul 225, the car was launched as the Consul Cortina until a modest facelift in 1964, after which it was sold simply as the Cortina.

The Cortina was available with 1200 and (from early 1963 1500 four-cylinder engines with all synchromesh gearbox, in two-door and four-door saloon, as well as in five-door estate (from March 1963) forms. Standard, Deluxe, Super, and GT trims were offered but not across all body styles. Early Standard models featured a simple body coloured front grille, earning it the nickname 'Ironbar', and large, round, ‘Ban the Bomb’ tail-light clusters. Since this version cost almost the same as the better equipped Deluxe it sold poorly and is very rare today. Options included heater and bench seat with column gearchange. Super versions of the estates offered the option of simulated wood side and tailgate trim. In an early example of product placement, many examples of the new Cortina featured as "Glamcabs" in the comedy film Carry On Cabby.

There were two main variations of the Mark 1. The Mark 1a possessed elliptical front side-lights, whereas the Mark 1b had a re-designed front grille incorporating the more rectangular side-light and indicator units. A notable variant was the Ford Cortina Lotus.

The Cortina was launched a few weeks before the London Motor Show of October 1962 with a 1198 cc three-bearing engine, which was an enlarged version of the 997 cc engine then fitted in the Ford Anglia. A few months later, in January 1963, the Cortina Super was announced with a five-bearing 1498 cc engine. Versions of the larger engine found their way into subsequent variations, including the Cortina GT which appeared in spring 1963 with lowered suspension and engine tuned to give a claimed output of 78 bhp (58 kW; 79 PS) ahead of the 60 bhp (45 kW; 61 PS) claimed for the Cortina 1500 Super. The engines used across the Mark I range were of identical design, differing only in capacity and setup. The formula used was a four-cylinder pushrod (over head valve) design that came to be known as the "pre-crossflow" version as both inlet and exhaust ports were located on the same side of the head. The most powerful version of this engine (used in the GT Cortina) was 1498 cc (1500) and produced 78 bhp (58 kW). This engine contained a different camshaft profile, a different cast of head featuring larger ports, tubular exhaust headers and a Weber double barrel carburettor. 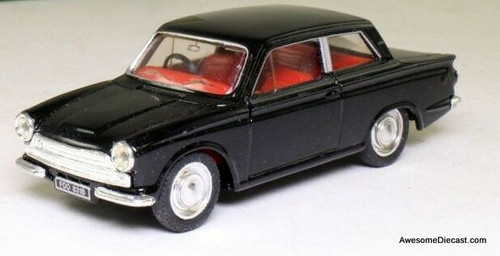