The first generation of the GTO was a muscle car produced in the 1960s and the 1970s. Although there were muscle cars introduced earlier than the GTO, the Pontiac GTO is considered by some to have started the trend with all four domestic automakers offering a variety of competing models.

The GTO was selected as the Motor Trend Car of the Year in 1968.

The GTO model was revived from 2004 to 2006 model years as a captive import for Pontiac, a left-hand drive version of the Holden Monaro, itself a coupé variant of the Holden Commodore.

The Tempest model line up, including the GTO, was restyled for the 1965 model year, adding 3.1 inches (79 mm) to the overall length while retaining the same wheelbase and interior dimensions. It had Pontiac's characteristic vertically stacked quad headlights. Overall weight was increased by about 100 lb (45 kg). The brake lining area increased by nearly 15%. Heavy-duty shocks were standard, as was a stronger front antisway bar. The dashboard design was changed, and an optional rally gauge cluster (US$86.08) added a more legible tachometer and oil pressure gauge. An additional option was a breakerless transistor ignition.

The 389 cubic inches engines received revised cylinder heads with re-cored intake passages and high rise intake manifolds, improving airflow to the engine. Rated power increased to 335 hp (250 kW) at 5,000 rpm for the base four-barrel engine; the Tri-Power engine was now rated 360 hp (270 kW) at 5,200 rpm. The 'S'-cammed Tri-Power engine had slightly less peak torque rating than the base engine 424 lb⋅ft (575 N⋅m) at 3,600 rpm as compared to 431 lb⋅ft (584 N⋅m) at 3,200 rpm. Transmission and axle ratio choices remained the same. The three-speed manual was standard, while two four-speed manual transmissions (wide or close ratio) and a two-speed automatic transmission were optional.

The restyled car had a new simulated hood scoop. A seldom seen dealer-installed option consisted of a metal underhood pan and gaskets to open the scoop, making it a cold air intake. The scoop was low enough that its effectiveness was questionable (it was unlikely to pick up anything but boundary layer air), but it allowed an enhanced engine sound. Another exterior change was the black "egg-crate" grille.

Car Life tested a 1965 GTO with Tri-Power and what they considered the most desirable options (close-ratio four-speed manual transmission, power steering, metallic brakes, rally wheels, 4.11 limited-slip differential, and "Rally" gauge cluster), with a total sticker price of US$3,643.79. With two testers and equipment aboard, they recorded a 0–60 miles per hour (0–97 km/h) acceleration time of 5.8 seconds, the standing quarter mile in 14.5 seconds with a trap speed of 100 miles per hour (160 km/h), and an observed top speed of 114 miles per hour (182.4 km/h) at the engine's 6,000 rpm redline. A four-barrel Motor Trend test car, a heavier convertible handicapped by the two-speed automatic transmission and the lack of a limited slip differential, ran 0–60 mph in 7 seconds and through the quarter mile in 16.1 seconds at 89 miles per hour (142.4 km/h).

Major criticisms of the GTO continued to center on its slow steering (ratio of 17.5:1, four turns lock-to-lock) and subpar brakes. Car Life was satisfied with the metallic brakes on its GTO, but Motor Trend and Road Test found the four-wheel drum brakes with organic linings to be alarmingly inadequate in high-speed driving.

Sales of the GTO, abetted by a marketing and promotional campaign that included songs and various merchandise, more than doubled to 75,342. It spawned many imitators, both within other GM divisions and its competitors. 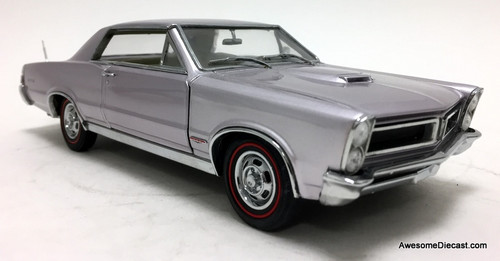