The Floride was offered from the outset both as a two-seater dry spider and as a coupé : in both cases, its line roughly resumed what were the typical features of sports cars, with a rather pointed and sharp grille . The large round headlights half incorporated in the muzzle were instead a feature of most of the cars of those years, especially the small and medium-sized sports cars. Like the Dauphine from which it was derived, the Floride also had a front bumper that arched upwards in the center, so as to allow access to the spare wheel compartment, obtained at that point. The hoodfront, under which the trunk was located, was smooth and without ribs of any kind. The side was perhaps the most original part of the entire car body: from the front, which initially took up the simplicity of the front, a chromed molura started that cut the entire side in two. Also in the sill there was a thin chrome line that highlighted that area. The rear part of the side was instead characterized by an almost vertical air intake and cut in two by the main chrome line. As for the tail, the two rear fins were evidentwhich housed the two elongated ovoid-shaped lighthouses, embellished with a silver-colored frame. The engine compartment cover was also smooth and free of ribs or any other element that disturbed its appearance. Between the two fins there was the large grill for extracting heat from the engine compartment. Characteristic of the Floride's tail was also the very enveloping rear bumper.

The interior of Floride betrayed the relationship with the Dauphine, especially as regards the dashboard, directly derived from the latter. The two-spoke steering wheel was devoid of horn, housed instead in a lever located to the left of the steering wheel. Being a rear-powered car, the comfort of a large trunk was missing, which is present in most other small spiders or coupes with traditional architecture (front engine, rear-wheel drive). In front, however, there was a compartment for loading luggage, which, although penalized by the cumbersome presence of the wheel arches, still managed to offer a capacity of 240 liters, to which were added the 175 liters of the area behind the two rear seats.

Butagaz is a French company created in 1931. Owned by the DCC Energy group since 2015, it is present on the liquefied petroleum gas market ( propane and butane ), natural gas and electricity in France, for individuals and professionals.

Shell creates in 1931 the company URG (Company for the rational use of gases), which will take in the 1980s the name of Butagaz. It was created to bottle liquefied petroleum gases ( butane and propane ) produced by the French refineries of the oil tankers Shell and BP , which it then sells on behalf of these two companies: it therefore acts as an agent for these two companies.

In 1969, the company acquired a mascot, a blue bear, which illustrated the group's advertising campaigns and communication media. In 2005, she took the name of "Bob" and experienced a modernization of her look. In 2012, to mark the 80th anniversary of the brand, Butagaz changed its logo. [ ref. desired]

In 2015, the company was sold to the DCC Energy group 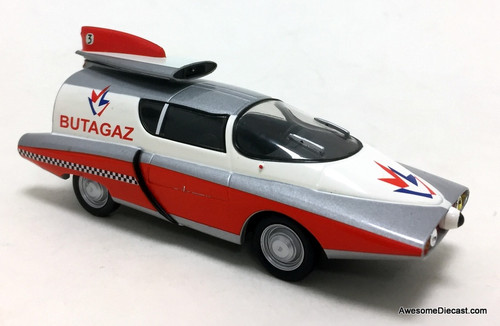