This model has working front and rear brakes

Tandem, or in tandem, is an arrangement in which a team of machines, animals or people are lined up one behind another, all facing in the same direction.

The original use of the term in English was in tandem harness, which is used for two or more draft horses, or other draft animals, harnessed in a single line one behind another, as opposed to a pair, harnessed side by side, or a team of several pairs. The tandem harness allows additional animals to provide pulling power for a vehicle designed for a single animal.

The English word tandem derives with a word play from the Latin adverb tandem, meaning at length or finally.

Tandem seating may be used on a tandem bicycle where it is alternative to sociable seating. Tandem can also be used more generally to refer to any group of persons or objects working together, not necessarily in line 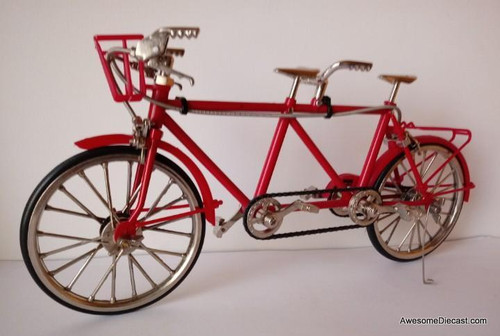