Prior to the first generation Suburban, in 1933 Chevrolet had offered a station wagon body built on the 1/2 ton truck frame. This model was specifically built for National Guard and Civilian Conservation Corps units. Much of the body was constructed from wood and could seat up to eight occupants.

The actual first-generation model was offered by Chevrolet as a "Carryall Suburban" – a tough, no-nonsense load carrier featuring a station wagon body on the chassis of a small truck. Focused on functionality, the concept was literally to "carry all": the whole family and their gear were to find sufficient space in one truck. It shared the front sheet metal and frames of the 1/2 ton pickup models of the same year, but featured all-metal wagon bodies differing very little in shape from contemporary "woodie" wagons. Seating for up to eight occupants was available, with three in the front row, two in the middle row, and three in the rear row. Either the side-hinged rear panel doors or a rear tailgate/lift window could be selected for cargo area access.

This model generation was based on the Chevrolet Advance Design series of pickups.

Beginning in 1953, the Hydra-Matic 4-speed automatic transmission was available in GMC models and in the 1954 model year Chevrolet Suburbans. Models with rear panel doors were designated "3106," while those with tailgates were designated "3116." In 1952, the Suburban came with either a tailgate or panel doors. The front bench seat was split, with two seats on the driver's side and a single seat on the passenger side, which slid forward for access to the rear two rows of seats. The second row was a "2/3" seat, requiring occupants to move past the front passenger seat, as well as the second-row seats to access the third row.

This was the last series to feature "Canopy express" models. 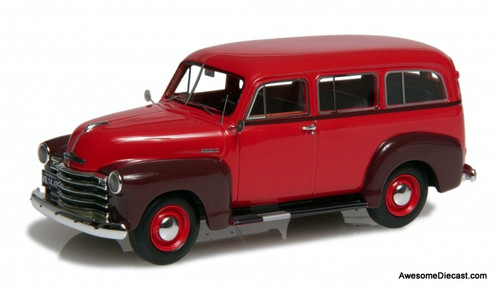