This model came out of an Estate sale and is in the original box and packaging, there is a little shelf wear in the corner of the box

This is a real collectors item

The M1 Abrams was developed as a result of the cancellation of the MBT-70 project, which was afflicted with numerous technical issues and cost overruns. In 1971 Congress cancelled the project and ordered a less costly alternative replacement for the aging M60. Both Chrysler and General Motors supplied prototypes and the Chrysler model was selected for further development. Eventually the M1 Abrams entered U.S. service in 1980, ultimately replacing the M60 tank, which had seen two decades of service at the time. The M1 currently serves as the main battle tank of the United States Army and Marine Corps, and is also used by the armies of Egypt, Kuwait, Saudi Arabia, Australia, and Iraq. The Abrams was first tested in combat in the Persian Gulf War and has seen service in both the War in Afghanistan and Iraq War under U.S. service, while Iraqi Abrams tanks have seen combat in the war against ISIL and have seen use by Saudi Arabia during the Yemeni Civil War. The Abrams was due to be replaced by the Future Combat Systems XM1202 but due to the cancellation of the program the U.S. military has opted to continue maintaining and operating the M1 Abrams for the foreseeable future by upgrading the tank with improved optics, armor and firepower.

Three main versions of the M1 Abrams have been deployed, the M1, M1A1, and M1A2, incorporating improved armament, protection, and electronics with each new model. These improvements and other upgrades to in-service tanks have allowed this long-serving vehicle to remain in front-line service. In addition, development of the improved M1A3 version was first publicly disclosed in 2009. Extensive improvements have been implemented to the latest M1A2C and D (formerly SEPv3 and SEPv4, respectively) versions such as improved composite armor, better optics, digital systems and ammunition

The M1 Abrams was developed during the Cold War as a successor to the canceled MBT-70. The M1 Abrams contract went to Chrysler Defense and was the first vehicle to adopt Chobham armor. Adaptations before the Persian Gulf War (Operations Desert Shield and Desert Storm) gave the vehicle better firepower and NBC (Nuclear, Biological and Chemical) protection. Being vastly superior to Iraqi tanks, very few M1 tanks were hit by enemy fire. Upgrades after the war improved the tank's weapons sights and fire control unit. The Abrams participated in the 2003 invasion of Iraq, exposing vulnerabilities in urban combat that were addressed with the Tank Urban Survival Kit (TUSK) modifications (armor upgrades and a gun shield). The Marine Corps sent a company of M1A1 Abrams tanks to Afghanistan in 2010. 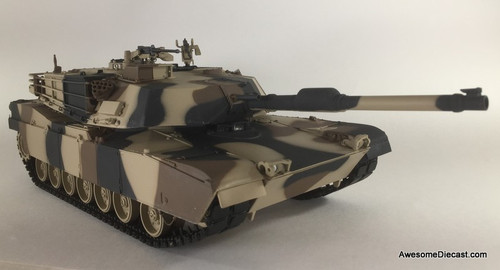