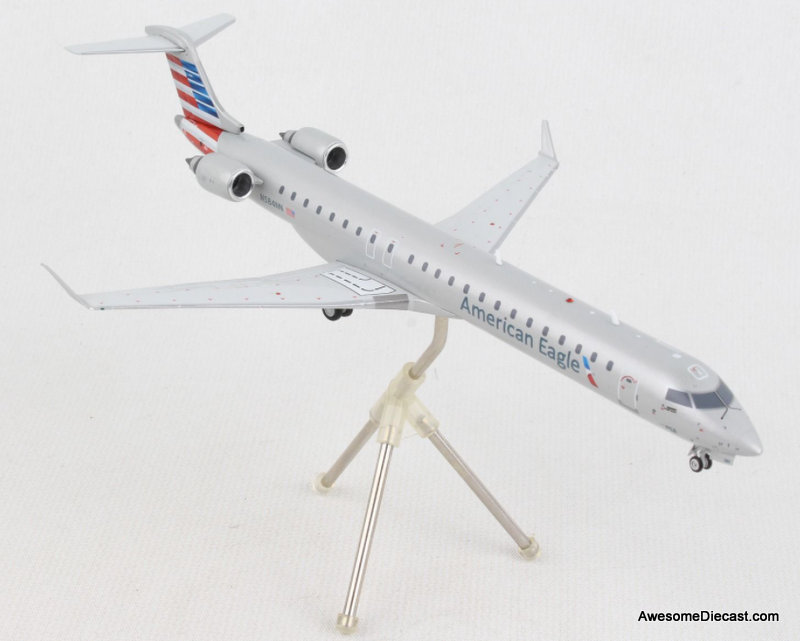 The Bombardier CRJ700, CRJ900, and CRJ1000 are a family of regional jet airliners that were designed and manufactured by Canadian transportation conglomerate Bombardier between 1999 and 2020. Their design was derived from the smaller CRJ100 and 200 airliners, the other members of the Bombardier CRJ aircraft family. The CRJ program was acquired by Japanese corporation Mitsubishi Heavy Industries in 2020, which ended production of the aircraft.

During the 1990s, Bombardier initiated development on the CRJ-X, a program to produce enlarged derivatives of its popular CRJ100/200 family. Officially launched in 1997, the CRJ700's maiden flight took place on 27 May 1999; it was soon followed by the stretched CRJ900 variant. Several additional variants of the type were subsequently introduced, including the elongated CRJ1000 and the CRJ550 and CRJ705 which were modified to comply with scope clauses. Competitors included the British Aerospace 146, the Embraer E-Jet family, the Fokker 70 and the Fokker 100.

In Bombardier's lineup, the CRJ Series was formerly marketed alongside a family of larger jets, the CSeries (now majority-owned by Airbus and marketed as the Airbus A220), and a twin-turboprop, the QSeries (now owned by De Havilland Canada and marketed as the Dash 8). During the late 2010s, Bombardier sought to sell off several of its aircraft programs. The CRJ program was acquired by Mitsubishi Heavy Industries in a deal that closed 1 June 2020. Bombardier continued to manufacture aircraft at the Mirabel facility until the order backlog was completed in December 2020. Mitsubishi will continue to manufacture parts for existing CRJ operators but does not plan to sell or build any new CRJ aircraft, and will focus instead on their SpaceJet aircraft.

This model can be displayed on the stand or with the landing gear down American Eagle is an American brand name for the regional branch of American Airlines, under which six individual regional...

As the popularity of the 50 seat CRJ-100/200 grew, many of the world's airlines turned to Bombardier for a larger aircraft that could carry a bigger payload. With the input that they received from...

This model can be displayed in flight on the stand or with landing gear down on the ground American Eagle is an American brand name for the regional branch of American Airlines, under which six...

This model can be displayed on the stand or with the landing gear down The Boeing 737 MAX is the fourth generation of the Boeing 737, a narrow-body airliner manufactured by Boeing Commercial...

American Eagle is an American brand name for the regional branch of American Airlines, under which six individual regional airlines operate short- and medium-haul feeder flights. Three of these...

The Airbus A350 is a long-range, wide-body jet airliner developed by Airbus. The first A350 design proposed by Airbus in 2004, in response to the Boeing 787 Dreamliner, would have been a development...

This model can be displayed on the stand or with the landing gear down The Airbus A220 is a family of narrow-body, twin-engine, medium-range jet airliners. The airliner was designed by Bombardier...