The first member of the A320 family—the A320—was launched in March 1984, first flew on 22 February 1987, and was first delivered in March 1988 to Air France. The family was extended to include the A321 (first delivered 1994), the A319 (1996), and the A318 (2003). The A320 family pioneered the use of digital fly-by-wire flight control systems, as well as side-stick controls, in commercial aircraft. There has been a continuous improvement process since introduction. Final assembly of the family takes place in Toulouse, France, and Hamburg, Germany. A plant in Tianjin, China, has also been producing aircraft for Chinese airlines since 2009, while a final assembly facility in Mobile, Alabama, United States, delivered its first A321 in April 2016.

In December 2010, Airbus announced a new generation of the A320 family, the A320neo. A320neo offers new, more efficient engines, combined with airframe improvements and the addition of winglets, named Sharklets by Airbus. The aircraft saves up to 15% of fuel and is the fastest selling commercial aircraft ever.First A320neo was delivered to Lufthansa on 20 January 2016 and entered service five days later.

As of December 2019, a total of 9,247 A320 family aircraft have been delivered with 8,796 still in service, where American Airlines was the largest operator with 412 aircraft in service. A number of 6,068 airliners were on firm order, resulting in a total order of 15,315. In October 2019, it surpassed the direct competitor, the Boeing 737, to become the highest-selling commercial aircraft ever. The A320 family is popular with airlines, including low-cost carriers such as EasyJet, which replaced its 737 classic fleet with the A320ceo and became a fully A320 operator.

When Airbus designed the Airbus A300 during the late 1960s and early 1970s, it envisaged a broad family of airliners with which to compete against Boeing and Douglas, two established US aerospace manufacturers. From the moment of formation, Airbus had begun studies into derivatives of the Airbus A300B in support of this long-term goal. Prior to the service introduction of the first Airbus airliners, engineers within Airbus had identified nine possible variations of the A300 known as A300B1 to B9. A 10th variation, conceived in 1973, later the first to be constructed, was designated the A300B10. It was a smaller aircraft which would be developed into the long-range Airbus A310. Airbus then focused its efforts on the single-aisle market, which was dominated by the 737 and McDonnell Douglas DC-9.

The head office of HK Express is located at One Citygate in Tung Chung, Lantau.

Hong Kong Express Airways Limited was incorporated on 10 March 2004, with the former Chinese name, added on 21 April 2004. The airline was owned by Macau casino entrepreneur Stanley Ho. In July 2004, Hong Kong's helicopter operator Heli Hong Kong officially announced plans to commence fixed-wing operation via Hong Kong Express, to become Hong Kong's fourth passenger airline. It was planning to introduce regional jet services to secondary cities in mainland China and was in negotiations with Bombardier and Embraer for the lease of several 50- or 70-seat regional jets. In April 2005, the airline was granted permission to transport passengers, cargo and mail from Hong Kong to selected destinations in China and permitted to apply for traffic rights to serve 15 Chinese cities. The next month, it received approval to operate scheduled air services to five cities in China, including Chongqing, Guangzhou, Hangzhou, Nanjing and Ningbo. The airline had its Air Operator's Certificate varied in July 2005 for the operation of Embraer 170 aircraft. The same month, it took delivery of its first of four 76-seat twin-jet Embraer 170, leased from General Electric Commercial Aviation Services (GECAS), and became the Asian launch operator of this regional jet. Two more aircraft were delivered in 2005, with the remaining delivered in May 2006.

The airline's initial use of its first Embraer 170 was on charter services to Taichung, Republic of China (Taiwan), on 3 September 2005. The first scheduled passenger services began to Guangzhou on 8 September 2005, with services to Hangzhou and Ningbo following in October 2005 and December 2005, respectively. On 19 November 2005, Hong Kong Air Transport Licensing Authority (ATLA) granted the airline additional licences to operate scheduled services to 16 destinations in mainland China, as well as Koh Samui, Okinawa, Siem Reap and Taichung. Scheduled passenger services to Chiang Mai and Chongqing were inaugurated on 22 June 2006 and 31 July 2006, respectively. 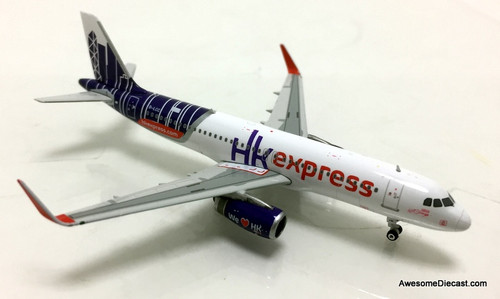