The Airbus A321 is a member of the Airbus A320 family of short- to medium-range, narrow-body, commercial passenger twin-engine jet airliners. The first derivative of the baseline A320, it has a stretched fuselage and entered service in 1994 with Lufthansa, around six years after the original A320. The aircraft shares a common type rating with all other Airbus A320 family variants, allowing existing A320 family pilots to fly the aircraft without the need for further training.

In December 2010, Airbus announced a new generation of the A320 family, the A320neo (new engine option). The similarly lengthened fuselage A321neo variant offers new, more efficient, engines, combined with airframe improvements and the addition of winglets (called Sharklets by Airbus). The aircraft delivers fuel savings of up to 15%. The A321neo carries up to 236 passengers, with a maximum range of 4,000 nmi (7,400 km; 4,600 mi) for the long-range version when carrying no more than 206 passengers.

The maiden flight of the Airbus A321 came on 11 March 1993, when the prototype, registration F-WWIA, flew with IAE V2500 engines; the second prototype, equipped with CFM56-5B turbofans, flew in May 1993. Lufthansa and Alitalia were the first to order the stretched Airbuses, with 20 and 40 aircraft requested, respectively. The first of Lufthansa's V2500-A5-powered A321s arrived on 27 January 1994, while Alitalia received its first CFM56-5B-powered aircraft on 22 March 1994.The A321-100 entered service in January 1994 with Lufthansa.

Final assembly for the A321 was carried out in Germany (then West Germany), a first for any Airbus. This came after a dispute between the French, who claimed that the move would incur $150 million (€135 million) in unnecessary expenditure associated with the new plant, and the Germans, who claimed that it would be more productive for Airbus in the long run. The second production line was located in Hamburg, which later produced the smaller Airbus A319 and A318. For the first time, Airbus entered the bond market, through which it raised $480 million (€475 million) to finance development costs. An additional $180 million (€175 million) was borrowed from European Investment Bank and private investors.

The Airbus A321 is a narrow-body (single-aisle) aircraft with a retractable tricycle landing gear and is powered by two wing pylon-mounted turbofan engines. It is a low-wing cantilever monoplane with a conventional tail unit having a single vertical stabilizer and rudder. Changes from the A320 include a fuselage stretch and some modifications to the wing. The fuselage was lengthened by a 4.27 m (14 ft 0 in) plug ahead of the wing and a 2.67 m (8 ft 9 in) plug behind it, so that the A321 is 6.94 metres (22 ft 9 in) longer than the A320. The length increase required the overwing window exits of the A320 to be converted into door exits and repositioned in front of and behind the wings. To maintain performance, double-slotted flaps and minor trailing edge modifications were included, increasing the wing area from 124 m2 (1,330 sq ft) to 128 m2 (1,380 sq ft).[16] The centre fuselage and undercarriage were reinforced to accommodate the increase in maximum takeoff weight of 9,600 kg (21,200 lb), taking it to 83,000 kg (183,000 lb)

British Airways (BA) is the flag carrier airline of the United Kingdom, headquartered at Waterside, Harmondsworth. It is the second largest airline in the United Kingdom, based on fleet size and passengers carried, behind easyJet. The airline is based in Waterside near its main hub at London Heathrow Airport. In January 2011 BA merged with Iberia, creating the International Airlines Group (IAG), a holding company registered in Madrid, Spain. IAG is the world's third-largest airline group in terms of annual revenue and the second-largest in Europe. It is listed on the London Stock Exchange and in the FTSE 100 Index. British Airways is the first passenger airline to have generated more than $1 billion on a single air route in a year (from April 1, 2017 to March 31, 2018 on the New York JFK - London Heathrow route).

BA was created in 1974 after a British Airways Board was established by the British government to manage the two nationalised airline corporations, British Overseas Airways Corporation and British European Airways, and two regional airlines, Cambrian Airways from Cardiff, and Northeast Airlines from Newcastle upon Tyne. On 31 March 1974, all four companies were merged to form British Airways. However, it is marking 2019 as its centenary on the basis of predecessor companies. After almost 13 years as a state company, BA was privatised in February 1987 as part of a wider privatisation plan by the Conservative government. The carrier expanded with the acquisition of British Caledonian in 1987, Dan-Air in 1992, and British Midland International in 2012. Its preeminence highlights the reach of the country's influence as many of its destinations in several regions were historically part of the British Empire.

It is a founding member of the Oneworld airline alliance, along with American Airlines, Cathay Pacific, Qantas, and the now defunct Canadian Airlines. The alliance has since grown to become the third largest, after SkyTeam and Star Alliance.

Proposals to establish a joint British airline, combining the assets of the British Overseas Airways Corporation (BOAC) and British European Airways (BEA) were first raised in 1953 as a result of difficulties in attempts by BOAC and BEA to negotiate air rights through the British colony of Cyprus. Increasingly BOAC was protesting that BEA was using its subsidiary Cyprus Airways to circumvent an agreement that BEA would not fly routes further east than Cyprus, particularly to the increasingly important oil regions in the Middle East. The Chairman of BOAC, Miles Thomas, was in favour of merger as a potential solution to this disagreement and had backing for the idea from the Chancellor of the Exchequer at the time, Rab Butler. However, opposition from the Treasury blocked the proposal.[10]

Consequently, it was only following the recommendations of the 1969 Edwards Report that a new British Airways Board, managing both BEA and BOAC, and the two regional British airlines Cambrian Airways based at Cardiff, and Northeast Airlines based at Newcastle upon Tyne, was constituted on 1 April 1972. Although each airline's individual branding was maintained initially, two years later the British Airways Board unified its branding, effectively establishing British Airways as an airline on 31 March 1974.

Following two years of fierce competition with British Caledonian, the second-largest airline in the United Kingdom at the time, the Government changed its aviation policy in 1976 so that the two carriers would no longer compete on long-haul routes.

British Airways and Air France operated the supersonic airliner Aerospatiale-BAC Concorde, and the world's first supersonic passenger service flew in January 1976 from London Heathrow to Bahrain. Services to the US began on 24 May 1976 with a flight to Washington Dulles airport, and flights to New York JFK airport followed on 22 September 1977. Service to Singapore was established in co-operation with Singapore Airlines as a continuation of the flight to Bahrain. Following the Air France Concorde crash in Paris and a slump in air travel following the 11 September attacks in New York in 2001, it was decided to cease Concorde operations in 2003 after 27 years of service. The final commercial Concorde flight was BA002 from New York JFK to London Heathrow on 24 October 2003. 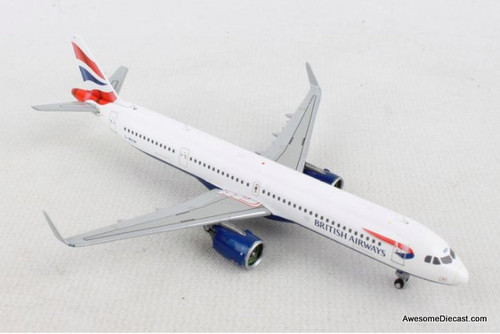