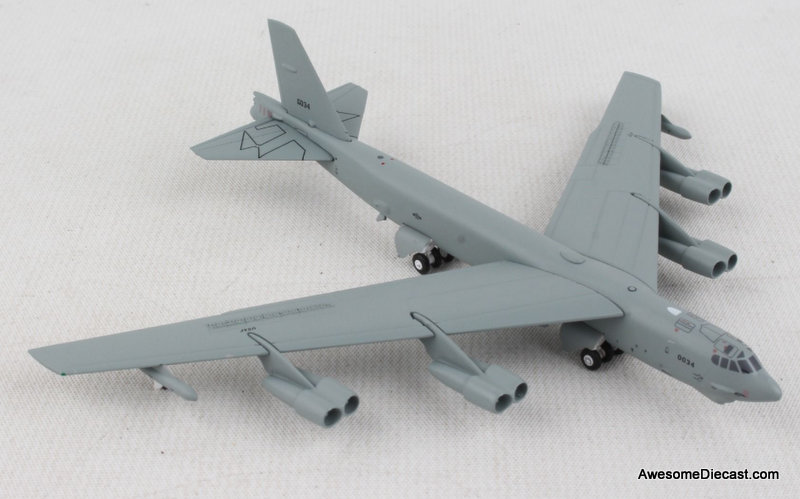 The Boeing B-52 Stratofortress is an American long-range, subsonic, jet-powered strategic bomber. The B-52 was designed and built by Boeing, which has continued to provide support and upgrades. It has been operated by the United States Air Force (USAF) since the 1950s. The bomber is capable of carrying up to 70,000 pounds (32,000 kg) of weapons,[2] and has a typical combat range of more than 8,800 miles (14,080 km) without aerial refueling.[3]

Beginning with the successful contract bid in June 1946, the B-52 design evolved from a straight wing aircraft powered by six turboprop engines to the final prototype YB-52 with eight turbojet engines and swept wings. The B-52 took its maiden flight in April 1952. Built to carry nuclear weapons for Cold War-era deterrence missions, the B-52 Stratofortress replaced the Convair B-36 Peacemaker. A veteran of several wars, the B-52 has dropped only conventional munitions in combat. The B-52's official name Stratofortress is rarely used; informally, the aircraft has become commonly referred to as the BUFF (Big Ugly Fat Fucker/Fella).[4][5][6][Note 1]

The B-52 has been in service with the USAF since 1955. As of June 2019, there are 76 aircraft in inventory; 58 operated by active forces (2nd Bomb Wing and 5th Bomb Wing), 18 by reserve forces (307th Bomb Wing), and about 12 in long-term storage at the Davis-Monthan AFB Boneyard.[8][9][10] [11][12] The bombers flew under the Strategic Air Command (SAC) until it was disestablished in 1992 and its aircraft absorbed into the Air Combat Command (ACC); in 2010, all B-52 Stratofortresses were transferred from the ACC to the new Air Force Global Strike Command (AFGSC). Superior performance at high subsonic speeds and relatively low operating costs have kept them in service despite the advent of later, more advanced strategic bombers, including the Mach 2+ B-58 Hustler, the canceled Mach 3 B-70 Valkyrie, the variable-geometry B-1 Lancer, and the stealth B-2 Spirit. The B-52 completed 60 years of continuous service with its original operator in 2015. After being upgraded between 2013 and 2015, the last airplanes are expected to serve into the 2050s.

The Airbus A330 Multi Role Tanker Transport (MRTT) is an aerial refuelling tanker aircraft based on the civilian Airbus A330. A total of 12 nations have placed firm orders for approximately 60...

The original lineage of the C-17 dates back to the early 1970's when the United States Air Force needed a single aircraft that would combine the capacity of the C-141 Starlifter and the C-5 Galaxy...

After World War II, the U.S. Military required a modern-day troop and cargo transport aircraft to replace its aging mixed fleet of piston-engine aging aircraft. On August 23, 1954, the first C-130A...

The Rockwell B-1 Lancer[N 1] is a supersonic variable-sweep wing, heavy bomber used by the United States Air Force. It is commonly called the "Bone" (from "B-One"). It is one of three strategic...

This model can be displayed on the stand or with landing gear down The Lockheed Martin C-130J Super Hercules is a four-engine turboprop military transport aircraft. The C-130J is a comprehensive...

The Boeing F/A-18E and F/A-18F Super Hornet are twin-engine, carrier-capable, multirole fighter aircraft variants based on the McDonnell Douglas F/A-18 Hornet. The F/A-18E single-seat and F/A-18F...