The Ford Falcon (XB) is a full-size car that was produced by Ford Australia from 1973 to 1976. It was the second iteration of the third generation of this Australian-made model and also included the Ford Fairmont (XB), the luxury-oriented version of the Falcon.

Ford Falcons commonly appear in the Mad Max series of Films. Falcons that play a significant role in the series are those produced from 1972 and onwards. Australian Ford Falcons come in 2 and 4 door varieties.

The Ford Falcon appears to be the most widely-used car by the Main Force Patrol, as patrol, pursuit, and interceptor vehicles. Max Rockatansky drives a yellow Ford Falcon interceptor during the film's opening chase. Other MFP officers also drive Falcons, most of which are knocked out of commission during the same pursuit of another car. The V8 Interceptor is also a Ford Falcon XB GT Coupe, with a custom aerodynamic front end and a highly modified engine. 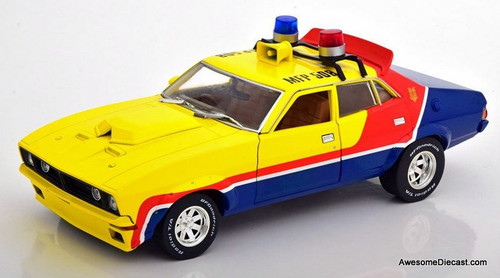