The Nissan GT-R is a high-performance sports car and grand tourer produced by Nissan, which was unveiled in 2007. It is the successor to the Skyline GT-R, although no longer part of the Skyline range itself, that name now being used for Nissan's luxury-sport market.

The production version of the GT-R debuted at the 2007 Tokyo Motor Show as the 2009 model year, with a lap time of 7:38 minutes at the Nürburgring Nordschleife beating the all time sports classic Porsche 911 Turbo as Nissan stated before launching the car. The GT-R launched in the Japanese market on December 6, 2007. The U.S. official launch was seven months later on July 7, 2008. Universal Nissan in Los Angeles provided a customer with the delivery of a new GT-R, fresh from the production line at 12:01 am, on July 7, 2008. The Canadian launch was also in July 2008. Europe became the third consumer market, where it launched in March 2009. The large disparity in initial marketing between these regional releases is due to Nissan having to build GT-R performance centers where the car is serviced.

The engines are hand built by only four specially trained mechanics called "Takumi Craftsmens" on a special line at Nissan's Yokohama plant and their names are badged on every GT-R engine. The cars are built at their Tochigi plant on a shared production line.

Nissan chief creative officer, Shirō Nakamura, has likened the new GT-R to the giant robots of the Gundam series. Nakamura stated: "The GT-R is unique because it is not simply a copy of a European-designed Sports car; it had to really reflect Japanese culture."

The Tokyo Metropolitan Police Department  serves as the prefectural police department of Tokyo Metropolis. Founded in 1874, it is headed by a Superintendent-General, who is appointed by the National Public Safety Commission, and approved by the Prime Minister.

The Metropolitan Police, with a staff of more than 40,000 police officers, and over 2,800 civilian personnel, manages 102 stations in the prefecture.

The main building of the Tokyo Metropolitan Police Department is located in the Kasumigaseki, Chiyoda ward, Tokyo. Built in 1980, it is 18 stories tall, a large wedge-shaped building with a cylindrical tower. It is easily seen from the street and a well-known landmark. 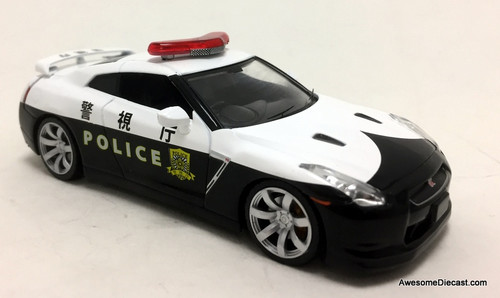