The Jeep Wrangler is a series of compact and mid-size (Wrangler Unlimited and Wrangler 2-door JL) four-wheel drive off-road SUVs, manufactured by Jeep since 1986, and currently in its fourth generation. The Wrangler JL, the most recent generation, was unveiled in late 2017 and is produced at Jeep's Toledo Complex.

The Wrangler is arguably an indirect progression from the World War II Jeep, through the CJ (Civilian Jeeps) produced by Willys, Kaiser-Jeep and American Motors Corporation (AMC) from the mid-1940s through 1980s. Although neither AMC nor Chrysler (after its purchase of AMC in 1987) have claimed that the Wrangler was a direct descendant of the original military model — both the CJ Jeeps and the conceptually consistent Wrangler, with their solid axles and open top, have been called the Jeep model as central to Jeep's brand identity as the rear-engined 911 is to Porsche.

Similar to the Willys MB and the CJ Jeeps before it, all Wrangler models continue to use a separate body and frame, rigid live axles both front and rear, a tapering nose design with flared fenders, a fold-flat windshield, and can be driven without doors. Also, with few exceptions, they have part-time four-wheel drive systems, with the choice of high and low gearing, and standard are open bodies with removable hard- or soft-tops. However, the Wrangler series was specifically redesigned to be safer and more comfortable on-road, to attract more daily drivers, by upgrading its suspension, drivetrain, and interior, compared to the CJ line. The suspension on all Wranglers included trackbars and anti-roll bars, and, from the 1997 TJ onwards, front and rear coil springs instead of the previous leaf-springs.

From 2004 on, the Wrangler has been complemented with long-wheelbase versions, called Wrangler Unlimited (until the release of the JK generation). 2004-2006 models were longer versions with 2 doors. In 2004 only automatic transmission equipped “Unlimited” versions were sold. In 2005 both an automatic and manual 6-speed (NSG-370) were offered. Since 2007, the long-wheelbase Wranglers were four-door models, offering over 20 in (508 mm) more room. By mid 2017 the four-door models represented three quarters of all new Wranglers on the market.

When the Rubicon-edition Wrangler was released to the general public in late 2003, it represented a triumph of the lunatic fringe over the bean counters and suits inside Jeep Corporation. ... The Rubicon package embodies what a Jeep should be: uncompromisingly off-road capable 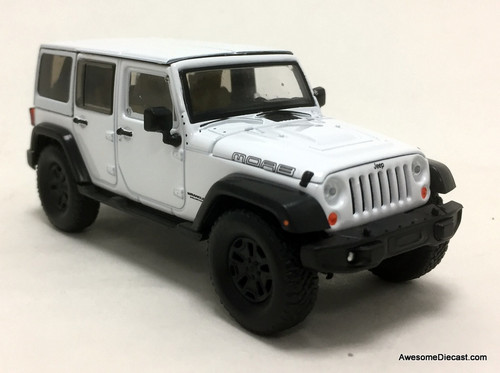