The fifth generation of the Ford F-Series is a line of pickup trucks and commercial trucks that were produced by Ford from the 1967 to 1972 model years. Built on the same platform as the fourth generation F-series trucks, the fifth generation had sharper styling lines, a larger cab and greenhouse, and expanded engine options.

Three trim levels were available during the production of the fifth generation F-series, though the names were changed in 1970. The "Base" trim became the "Custom" and the "Custom Cab" became the "Sport Custom" joining "Ranger" as optional levels of equipment and trim. Late in production the Ranger trim level was upgraded with the additional "Ranger XLT" option.

1968: As federal regulations required all automotive manufacturers to install side marker reflectors or lights, Ford redesigned the hood emblems to incorporate reflectors as well as added reflectors to the rear of the bed. Interior fittings changed due to new safety standards. New versions of the FE-Series engine added (360 truck and 390). First year of factory-installed air conditioning (air conditioning was installed by the dealer before 1968).

76 (formerly Union 76) is a chain of gas stations located within the United States. The 76 brand is currently owned by Phillips 66 Company. Union Oil Company of California, dba Unocal, the original owner and creator of the 76 brand, merged with Chevron Corporation in 2005. 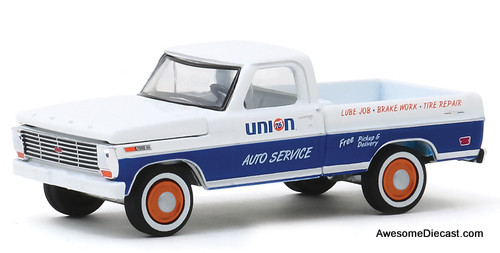