The Ford Bronco is a model line of SUVs that were manufactured and marketed by Ford from 1965 to 1996. The first sport-utility vehicle marketed by Ford, the Bronco was initially a compact design based on its own chassis, competing against the Jeep CJ-5 and International Harvester Scout. For 1978, the Bronco became a shortened version of the F-Series (F-100, later F-150) pickup truck for its next four generations; the full-size Bronco competed against the Chevrolet K5 Blazer and Dodge Ramcharger.

Sharing only its nameplate with the Bronco, the Ford Bronco II was a compact SUV based on the Ford Ranger for the 1984 to 1990 model years (replaced by the Ford Explorer).

Following declining demand for two-door SUVs during the 1990s, Ford discontinued the Bronco after the 1996 model year, replacing it with the four-door Ford Expedition (and the larger Ford Excursion). For the 2021 model year, Ford returned the Bronco SUV after a 25-year hiatus. Serving as a mid-size vehicle for the first time, the Bronco is now packaged as a direct competitor for the Jeep Wrangler.

From 1965 to 1996, Broncos were produced by Ford at its Michigan Truck Plant in Wayne, Michigan; the 2021 model line will also be produced alongside the Ford Ranger at the same facility.

Following the introduction of the ninth-generation Ford F-150, the Bronco saw a major design update for the 1992 model year. It was based on the same basic F-Series chassis introduced in late 1977, and the Bronco also saw updates to the exterior and interior. In the interest of making the vehicle more aerodynamic, designers again used wraparound composite headlight units and a larger grille. Although protruding from the body, the larger front bumper was given a rounded design. The interior again saw updates to the dashboard and instrument panel, with the addition of leather front seats as an option for XLT and Eddie Bauer trims as well as optional remote keyless entry with an anti-theft alarm. 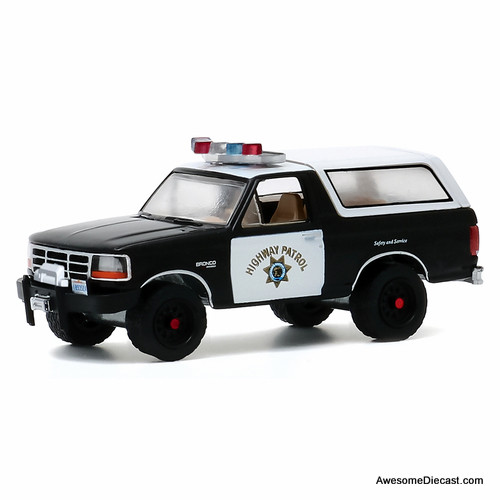