Horch  was a car brand manufacturer, founded in Germany by August Horch & Cie at the beginning of the 20th century.

It is one of the predecessors of the present day Audi company, which itself resulted from the merger of Auto Union Aktiengesellschaft (AG) and NSU Motorenwerke in 1969. Auto Union AG in turn was formed in 1932, following the merger of Horch DKW, Wanderer and the original Audi Automobilwerke GmbH Zwickau, established by August Horch in 1910.

August Horch and his first business partner Salli Herz established the company on November 14, 1899 in the district of Ehrenfeld, Cologne in Cologne. August Horch had previously worked as a production manager for Karl Benz. Three years later, in 1902, he moved the company to Reichenbach im Vogtland. On May 10, 1904 he founded the Horch & Cie. Motorwagenwerke AG, a joint-stock company in Zwickau (Kingdom of Saxony). The city of Zwickau was the capital of the South Western Saxon County and one of Saxony's industrial centres at that time.

After troubles with the Horch chief financial officer, August Horch founded a second company on 16 July 1909, the August Horch Automobilwerke GmbH in Zwickau. He had to rename the company because Horch was already a registered brand and he did not hold the rights to the name. On 25 April 1910 the name Audi Automobilwerke was entered in the company's register at the Zwickau registration court. Audi is the Latin translation of horch, from the German verb "horchen", which means "listen!" (compare English "hark"). The Audi name was proposed by a son of one of Horch's business partners from Zwickau.

In 1932 both companies from Zwickau (Horch and Audi) merged with Zschopauer Motorenwerke J. S. Rasmussen (the DKW brand) and the Wanderer car-production facilities to become the Auto Union corporation of Saxony. The Silver Arrow racing cars of the Auto Union racing team in Zwickau—developed by Ferdinand Porsche and Robert Eberan von Eberhorst, and driven by Bernd Rosemeyer, Hans Stuck, Tazio Nuvolari and Ernst von Delius—became known the world over in the 1930s. 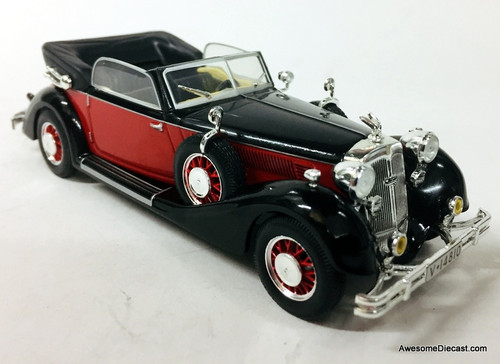