The Chevrolet and GMC B series is a series of cowled chassis that were produced by General Motors, primarily fitted with school bus bodies throughout its production. Based on the medium-duty (Class 6-7) trucks produced by the Chevrolet and GMC divisions of General Motors, the B series was produced in three separate generations; GMC initially produced its own version separate from Chevrolet. Introduced in 1966, the B series was redesigned in 1984 and 1992 as a 1993 model.

Following the end of a supply agreement with Blue Bird Corporation, effectively leaving General Motors without a body manufacturer with which to supply chassis, the company exited production of full-size bus chassis, producing the later GMT560 solely as a cutaway-cab vehicle. The Blue Bird Vision entered production in 2004, becoming the first conventional-style school bus produced without a second-party chassis.

As of 2017, General Motors remains a supplier of bus chassis for school bus and commercial bus use. Currently, all examples are cutaway van chassis based on the GMT610 architecture (Chevrolet Express/GMC Savana).

While General Motors redesigned its entire light and medium-duty C/K truck line for 1973, Chevrolet and GMC retained the previous-generation cowled bus chassis for nearly another decade. For 1984, a second generation was introduced, consolidating conventional trucks and cowled bus chassis for the first time. Codenamed B6, the redesign was again shared by both Chevrolet and GMC, differing only in grille design. From the drivers' compartment, the B6 chassis shared the steering column with its predecessor (with nearly the same instrument panel).

In a major design change, the rear-hinged hood was replaced by a standard front-hinged tilting hood, allowing improved engine access. The 6.0L (366) and 7.0L (427) V8 engines made their return, along with the 8.2L Detroit Diesel "Fuel Pincher" V8. In 1990, the 8.2L engine was discontinued.

In 1985, General Motors developed a modified version of the B series for Ward Body Works as a chassis for the Ward Patriot school bus. To allow for a shortened hood (to improve driver visibility), the front chassis of the C/K conventional was shortened for a configuration similar to that of the smaller Chevrolet/GMC P-chassis. The "semi-forward control" design would be developed further by GM with the Thomas Vista, another bus that would use a GM B-series chassis during its production. 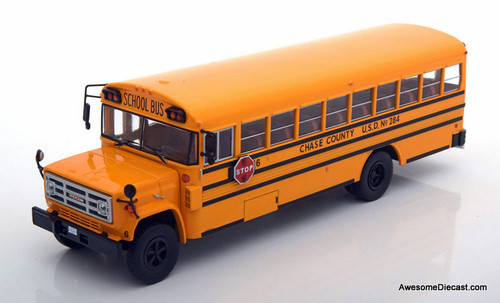