The Irisbus Agora (previously known as Renault Agora, Karosa City Bus or Ikarus Agora) was a low-floor bus designed and built by Renault from 1995 to 2002, date upon which it has been built by Irisbus, firstly a joint-venture with Fiat subsidiary Iveco from 1999, with Iveco engines. It has also been built by Czech-based Karosa under the Citybus name as a diesel-powered bus, and Skoda as a trolleybus in Eastern European markets as the Škoda 24Tr Irisbus and Škoda 25Tr Irisbus.

The range consisted of:

Standard 12-metre "S" version, available in one-, two- or three-door form
Articulated 18-metre "L" version in three- or four-door form
"Line" 12-metre version in one, two or three-door form (built from 1999). This version is distinct from the standard Agora by its engine layout, which is longitudinally-mounted (under the rear passenger seats) instead of being transversely mounted in the Agora S and L. That gives the Line version a slightly greater seating capacity and a better fuel economy over the S version. This version was briefly sold in the United Kingdom, in right hand drive.
Intercity version called "Moovy" (unveiled in 2003) which was based on the Agora Line

A police bus, also known as a police van is a minibus, full-sized bus or coach used by police forces for a variety of reasons.

Depending on the use, police buses might have markings or a livery indicating its ownership by the police, and also have appropriate equipment fitted. Police buses can be ordinary buses with minor or no modification, have some degree of protection for riot duties, or be fully fitted armoured buses.

Seated buses are used by police forces for transporting large numbers of officers to a needed area, such as for crowd control at sports events and demonstrations, or to facilitate large scale deployments for more serious riot control, such as the UK miners' strike (1984–1985). These may be hired vehicles, or vehicles retained by the police force for the purpose.

Police buses are also used at some large events as static temporary holding and processing areas, where detained people can be processed, and held until onward transport in another vehicle is possible. Police buses may also serve as prisoner transport vehicles where the police force has responsibility for this.

The police may also use buses converted by a bus manufacturer or other specialist company (from a new or retired school bus-style body), to serve more specific purposes. This can be as an incident control room or mobile command post, or even as small mobile police stations for public events. The Toronto Police Service, for instance, has used retired transit buses for their fleet.

Other roles for converted police buses can include being used in public information or awareness campaigns, or as mobile recruitment displays. 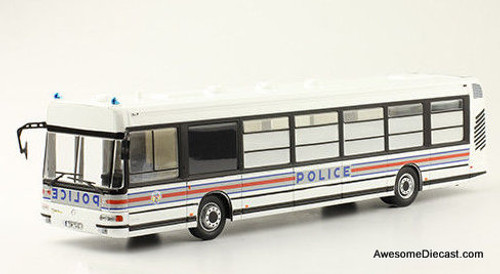