This is part of the Big Time Muscle series

The AC Cobra, sold as the Shelby Cobra in the United States, is an Anglo-American sports car with a Ford V8 engine, produced intermittently in both the UK and the US since 1962.

Like many British manufacturers, AC Cars had been using the Bristol straight-6 engine in its small-volume production, including its AC Ace two-seater roadster. This had a hand-built body with a steel tube frame, and aluminium body panels that were made using English wheeling machines. The engine was a pre-World War II design by BMW which by the 1960s was considered dated. Bristol decided in 1961 to cease production of its engine and instead to use Chrysler 313 cu in (5.1 L) V8 engines. AC started using the 2.6 litre Ford Zephyr engine in its cars.

In September 1961, American automotive designer Carroll Shelby wrote to AC asking if they would build him a car modified to accept a V8 engine. AC agreed, provided a suitable engine could be found. Shelby went to Chevrolet to see if they would provide him with engines, but not wanting to add competition to the Corvette they said no. However, Ford wanted a car that could compete with the Corvette and they happened to have a brand new engine which could be used in this endeavor: the Windsor 221 in³ (3.6 L) engine – a new lightweight, thin-wall cast small-block V8. Ford provided Shelby with two engines.

Shelby experimented with a larger Ford FE engine, of 390 cubic inches (6.4 L) in chassis number CSX2196. Unfortunately the car was not able to receive the development it needed, as resources were aimed at taking the crown from Ferrari in the GT class. Ken Miles drove and raced the FE-powered Mark II at Sebring and pronounced the car virtually undriveable, naming it "The Turd". It failed to finish with the engine expiring due to damper failure.

CSX2196 was revised for the show down at Nassau which allowed a more relaxed class division of racing. This allowed the GT cobras to run with prototype Ford GT, GM Grand Sport Corvettes and Lola Mk.6. It was for this event in 1964 that the Fliptop cobra was used. An aluminium 390 cubic inches (6.4 L) engine was used. However, the car failed to finish

Some Cobra 427s were actually fitted with Ford's 428 cubic inches (7.01 L) engine, a long stroke, smaller bore, lower cost engine, intended for road use rather than racing. The AC Cobra was a financial failure that led Ford and Carroll Shelby to discontinue importing cars from England in 1967. 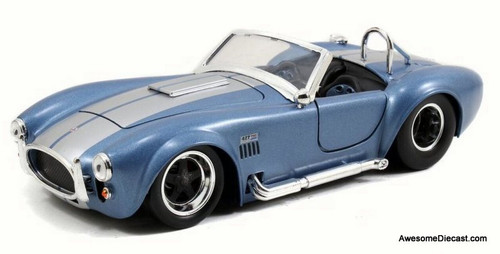