The Lamborghini Centenario is a limited production sports car based on the Lamborghini Aventador which was unveiled at the 2016 Geneva Motor Show to commemorate the 100th birthday of the company's founder, Ferruccio Lamborghini.

Lamborghini developed the Centenario to showcase the advancement of new technologies and also as a test bed for the development of new Lamborghini models.

The Centenario is the first Lamborghini automobile to be deployed with rear-wheel steering. The system is designed to provide added maneuverability at low speed, in a city driving environment, and improved stability at high speed.

This is also the first Lamborghini model to be equipped with the company's new infotainment system. The system consists of a new 10.1-inch portrait screen which also records telemetry and driving data.

The car also serves as a base for showcasing the new aerodynamic advancements developed by the company. A twin-deck splitter at the front helps in generating downforce as well as to let air pass through the side of the car while working in conjunction with the side blades. The Centenario also has the largest rear diffusers to ever be incorporated into a car, the diffusers along with the electronically controlled twin deck rear-wing aids further in downforce. The car generates 227 kg (500 lb) at 280 km/h (174 mph).

The engine is mated to the same 7-speed ISR semi-automatic transmission as used on an Aventador along with the all-wheel-drive drivetrain developed by Haldex. The power steering has two turns lock-to-lock. The suspension system is a push-rod design.

The car has three driving modes, namely, "Strada" (for normal city driving), "Sport" (for high performance driving) and "Corsa" (for optimum track performance). The car comes with either leather or Alcantara upholstery on the interior mostly carried over from the Aventador, customisable to the customer's specifications. The interior has a carbon fibre trim along with carbon fibre shift pedals and has sound deadening materials removed.

A total of 40 cars, (20 coupes and 20 roadsters) were produced, all of which were already sold via invitation to selected customers. 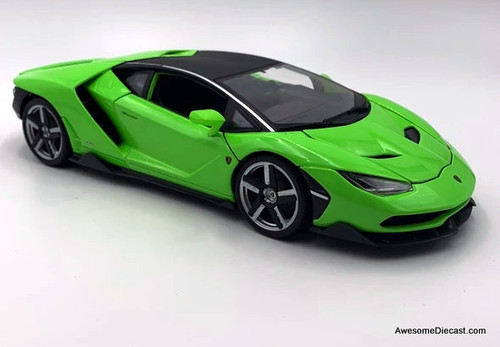