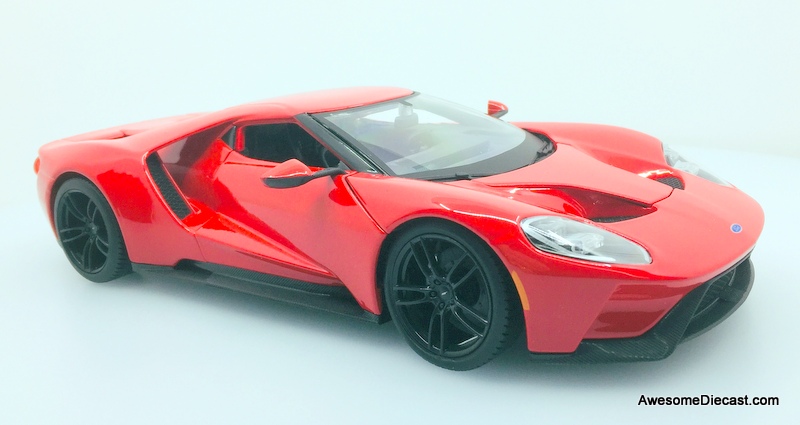 The Ford GT is an American mid-engine two-seater sports car manufactured and marketed by Ford for model year 2005 in conjunction with the company's 2003 centenary. The Ford GT began production again from the 2017 model year.

he Ford GT began life as a concept car designed in anticipation of the automaker's centennial year and as part of its drive to showcase and revive its "heritage" names such as Mustang and Thunderbird. At the 2002 North American International Auto Show , Ford unveiled a new GT40 Concept car. Camilo Pardo, the then head of Ford's "Living Legends" studio, is credited as the chief designer of the GT and worked under the guidance of J Mays. Carroll Shelby, the original designer of the Shelby GT 500, was brought in by Ford to help develop the GT; which included performance testing of the prototype car. While under development, the project was called Petunia.

The GT is similar in outward appearance to the original GT40, but is bigger, wider, and most importantly 4 in (100 mm) taller than the original's 40 in (100 cm) overall height; as a result, a potential name for the car was the GT44. Although the cars are visually related, structurally, there is no similarity between the modern GT and the 1960s GT40 that inspired it. Three pre-production cars were shown to the public in 2003 as part of Ford's centenary celebrations, and delivery of the production version called simply the Ford GT began in the fall of 2004.

As the Ford GT was built as part of the company's 100th anniversary celebration, the left headlight cluster was designed to read "100".

A British company, Safir Engineering, who built continuation GT40 cars in the 1980s, owned the "GT40" trademark at that time. When production of the continuation cars ended, they sold the excess parts, tooling, design, and trademark to a small Ohio based company called Safir GT40 Spares. This company licensed the use of the "GT40" trademark to Ford for the initial 2002 show car. When Ford decided to put the GT40 concept to production stage, negotiations between the two firms failed, thus the production cars are simply called the GT

The GT was produced for the 2005 and 2006 model years. The car began assembly at Mayflower Vehicle Systems in Norwalk, Ohio and was painted and continued assembly at Saleen Special Vehicles facility in Troy, Michigan, through contract by Ford. The GT is powered by an engine built at Ford's Romeo Engine Plant in Romeo, Michigan. Installation of the engine and transmission along with seats and interior finishing was handled in the SVT building at Ford's Wixom, Michigan plant.

Of the 4,500 cars originally planned, approximately 100 were to be exported to Europe, starting in late 2005. An additional 200 cars were destined for sale in Canada. Production ended in September 2006 without reaching the planned production target. Approximately 550 cars were built in 2004, nearly 1,900 in 2005, and just over 1,600 in 2006, for a grand total of 4,038 cars. The final 11 car bodies manufactured by Mayflower Vehicle Systems were disassembled, and the frames and body panels were sold as service parts. The Wixom Assembly Plant has stopped production of all models as of May 31, 2007. Sales of the GT continued into 2007, from cars held in storage and in dealer inventories.

When the Ford GT was first announced, the demand outpaced supply, and the cars initially sold for premium prices. The first private sale of Ford's new mid-engine sports car was completed on August 4, 2004, when former Microsoft executive Jon Shirley took delivery of his Midnight Blue 2005 Ford GT. Shirley earned the right to purchase the first production Ford GT (chassis #10) at a charity auction at the Pebble Beach Concours d'Elegance Auction after bidding over $557,000.

A few other early cars sold for as much as a US$100,000 premium over the suggested retail price of $139,995 (Ford increased the MSRP to $149,995 on July 1, 2005). Optional equipment available included a McIntosh sound system, racing stripes, painted brake calipers, and forged alloy wheels adding $13,500 to the MSRP.

During the GT's production run, the car was featured on the cover of the video game Gran Turismo 4 and Gran Turismo 5, and was also featured in Need for Speed: Carbon and Need for Speed: ProStreet, as well as being made into physical form in the Transformers: Alternators toyline, which featured realistic cars turning into Cybertronians; the Ford GT mold was used for the characters Mirage and Rodimus

At the 2015 North American International Auto Show and at the unveiling of the 2015 racing video game Forza Motorsport 6, a new, redesigned Ford GT was shown to the public with plans for production in 2016. The car marked 50 years since the GT40 won the 1966 24 Hours of Le Mans and competed successfully in the 2016 24 Hours of Le Mans to better celebrate the anniversary, winning the LMGTE Pro class.

The car is powered by a 3,496 cc (3.5 L; 213.3 cu in) Twin-turbocharged Ford EcoBoost V6 engine generating a power output of 647 hp (482 kW; 656 PS) and 550 lb⋅ft (746 N⋅m) of torque. The engine shares many components with the F-150's 3.5 L V6 engine including the cylinder heads, block and dual fuel system. Notable differences include larger turbochargers, an aluminum intake manifold, a custom dry sumped lubrication system, unique camshafts and higher strength rotating and timing drive components. At the time of introduction, the Ford GT had one of the highest specific power outputs of any production car.

According to Ford, "the GT will exhibit one of the best power-to-weight ratios of any production car," courtesy of its lightweight carbon fiber construction. Underpinning the GT is a carbon fiber monocoque bolted to aluminum front and rear subframes covered in carbon fiber body panels. The car also has a race inspired pushrod suspension system, active aerodynamics, and dihedral (butterfly) doors. The windshield of the vehicle is made of Gorilla Glass manufactured by Corning, which is also used for manufacturing smartphone screens. The Gorilla Glass is used to reduce the weight of the vehicle by allowing for a thinner windscreen with the same strength as a normal glass windscreen. The GT employs a four-stage external dry sump oil pump and has an oil capacity of 15.3 US quarts (14.5 L).

A track-day-only Ford GT Mk II was launched on 4 July 2019 at the Goodwood Festival of Speed. It is 200 pounds (90 kg) lighter than the road car. It is not street legal and only 45 will be built and each costs $1.2 million being the most expensive new Ford ever

The Ford GT is a mid-engine two-seater sports car manufactured and marketed by American automobile manufacturer Ford for the 2005 model year in conjunction with the company's 2003 centenary. The...