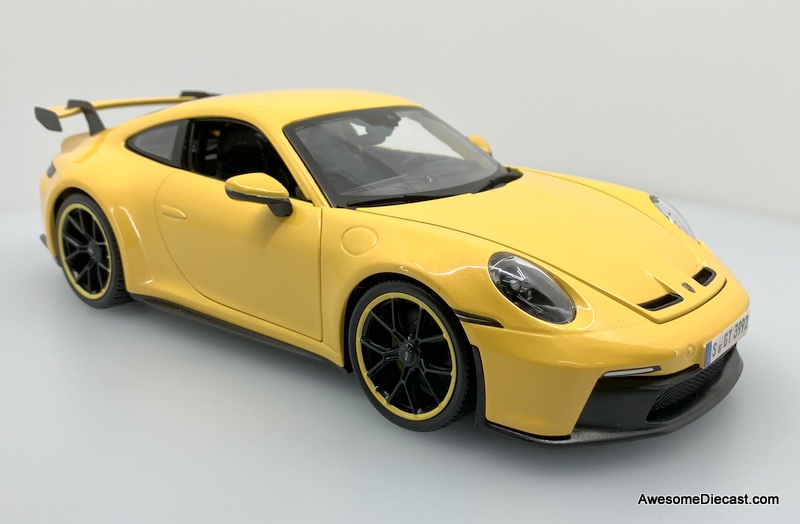 The Porsche 911 GT3 is a high-performance homologation model of the Porsche 911 sports car. It is a line of high-performance models, which began with the 1973 911 Carrera RS. The GT3, introduced in 1999, is named after the Fédération Internationale de l'Automobile (FIA) Group GT3 class, in which its racing counterpart was designed to compete.

The GT3 has had a successful racing career in the one-make national and regional Porsche Carrera Cup and GT3 Cup Challenge series, as well as the international Porsche Supercup supporting the FIA Formula 1 World Championship.

In 2003, Porsche introduced the Porsche 911 GT3 RS, an even more track-focused version of the 996 GT3. RS is short for the German RennSport, literally "racing sport" in English. The "RS" moniker, and the characteristic lightweight blue or red wheels and "GT3 RS" side stickers link the 996 GT3 RS to historically important Porsches such as the Carrera 2.7 RS of the early 1970s. The 996 GT3 RS is lighter than the 996 GT3 thanks to a polycarbonate rear window, carbon fibre hood and rear wing. Porsche Ceramic Composite Brake (PCCB) Carbon fibre-reinforced Silicon Carbide (C/SiC) ceramic composite brakes, which are also more heat and fade resistant than the cast iron units fitted as standard, were optional.

The 996 GT3 RS has a slightly different engine specification to the 996 GT3. The cylinder heads of the 996 GT3 RS have reshaped intake and exhaust ports for race homologation. Porsche claim the same 381 hp (284 kW) power output as the standard GT3 but Porsche's control dyno showed a jump to nearly 400 hp (298 kW) The RS also has progressive springs rather than linear. The dampers are uprated and are between 10 and 15 percent stiffer than the 996 GT3 in bounce and rebound.

The wheel carriers are totally redesigned to maximize the improved dynamic camber control. The suspension top mounts can be turned 120 degrees to a cup car position. Both front and rear control arms are adjustable. The RS is 3 mm (0.1 in) lower than the 996 GT3.

The rear wing delivers 35 kg (77 lb) of downforce at 201 km/h (125 mph). The RS has ram air ducts on the engine bay which force air into the intake with 18 mb of pressure at 301 km/h (187 mph) and this is enough to create an excess power output of 15 hp (11 kW; 15 PS). This additional power output cannot be homologated since the official engine output figures are certified on a dynamometer.