This detailed resin model comes in a acrylic display case

The 1961 Chrysler Turboflite show car design looked like it was out of a Buck Rogers movie. Some consumers at the time thought the car might be the design of the future, but others thought it was just too radical for the market. Many automotive historians have said that the 1961 Chrysler Turboflite was the last prototype design of Virgil Exner’s tenure at the company.

Virgil Exner was hired by Chrysler President K.T. Keller in 1949. He had designed the K-310 show car, which had been a great success. The K-310 was designed to showcase Chrysler’s upcoming revolutionary 1951 Hemi V8 engine, and the first expression of Exner’s “Pure Automobile” design philosophy. In 1953, Exner was named Director of Styling and later became Chrysler’s first Vice President of Styling in 1957.

The Turboflite prototype offered a turbine engine weighing half as much as a conventional internal combustion V-8 engine. The glass canopy styling feature was one of the major design themes that attracted consumers. The glass canopy, including the windshield, would automatically raise when the doors would open. The side windows were hinged at the roof.

Like many show cars from the Exner era, the 1961 Turboflite was designed and constructed for Chrysler by the coachbuilding firm of Ghia of Turin, Italy. It was designed by Maury Baldwin.

The Turboflite show car was powered by Chrysler’s third generation C2A turbine engine. Although it lacked a functional powertrain, a 110-volt power cord was available that was used to line up through the floor pan to operate the various demonstration features, including the canopy and electroluminescent lighting. The interior design offered a cockpit sports aircraft-themed seat design, an instrument panel with a large tachometer dial to the right of the steering column with an advanced temperature gauge.

From drawing board through the construction process, the 1961 Chrysler Turboflite show car was different by design and air dynamic. The tailfin design on the rear was developed for highway speed. Some automotive historians said that the radical two-door coupe design with a retractable flight cockpit style-style roof canopy featured a prominent winged spoiler positioned high over the rear deck. This aerodynamic feature would later be successfully used on the 1969-1970 Dodge Charger Daytona and Plymouth Road Runner NASCAR competition, which were very popular during the late 1960s and early 1970s.

Baldwin said this about the 1961 Chrysler Turboflite show-car design: “I think this was the last Exner show car. We incorporated a lot of interesting things in it. Entrance-wise, the entire cockpit above the beltline lifted to admit passengers. Mounted between the fins was a deceleration flap, such as is now used on racing cars, and the headlights were retractable. The car was built by Ghia, we did a three-eights model and then full-size drawings. It was probably one of the best engineered cars we ever did.”

In conclusion, the 1961 Chrysler Turboflite was a unique design that incorporated a lot of interesting features that were used on future Chrysler models. Virgil Exner, who is now a part of our automotive history books, will always be remembered as a great automotive designer. He was chief designer for Chrysler from 1953 to 1962. He once said that his greatest pride wasn’t in the deigns he created, but in the creation of Chrysler’s styling department. The 1961 Chrysler Turboflite show car, along with all of the Chrysler concepts of the Exner era, will always be remembered by many generations to come. 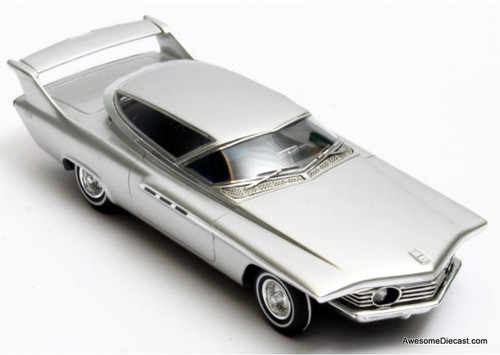