The 918 Spyder was first shown as a concept at the 80th Geneva Motor Show in March 2010. On 28 July 2010, after 2,000 declarations of interest, the supervisory board of Porsche AG approved series development of the 918 Spyder. The production version was unveiled at the September 2013 Frankfurt Motor Show. Porsche also unveiled the RSR racing variant of the 918 at the 2011 North American International Auto Show, which combines hybrid technology first used in the 997 GT3 R Hybrid, with styling from the 918 Spyder. But that version didn't make it to production. The 918 Spyder was the second plug-in hybrid car manufactured by Porsche, after the 2014 Panamera S E-Hybrid.

The 918 Spyder is powered by a 4,593 cc (4.6 L; 280.3 cu in) naturally aspirated V8 engine built on the same architecture as the one used in the RS Spyder Le Mans Prototype racing car without any engine belts.

The energy storage system is a 312-cell, liquid-cooled 6.8 kWh lithium-ion battery positioned behind the passenger cell. In addition to a plug-in charge port at the passenger-side B pillar, the batteries are also charged by regenerative braking and by excess output from the engine when the car is coasting. CO
2 emissions are 79 g/km and fuel consumption is 3 L/100 km (94 mpg‑imp; 78 mpg‑US) under the New European Driving Cycle (NEDC). The U.S. Environmental Protection Agency (EPA) under its five-cycle tests rated the 2015 model year Porsche 918 Spyder energy consumption in all-electric mode at 50 kWh per 100 miles, which translates into a combined city/highway fuel economy of 3.5 L/100 km (81 mpg‑imp; 67 mpg‑US). When powered only by the gasoline engine, EPA's official combined city/highway fuel economy is 22 mpg‑US (11 L/100 km; 26 mpg‑imp).

The 4.6 litre V8 petrol engine can recharge an empty battery on about two litres of fuel. The supplied Porsche Universal Charger requires seven hours to charge the battery on a typical 110 volt household AC socket or two hours on a dedicated Charging Dock installed with a 240 volt industrial supply. An optional DC Speed Charging Station can restore the battery to full capacity in 25 minutes.

The 918 Spyder offers five different running modes: E-Drive allows the car to run under battery power alone, using the rear electric motor and front motor, giving a range of 29 kilometres (18 mi) for the concept model. The official U.S. EPA all-electric range is 12 mi (19 km). The total range with a full tank of gasoline and a fully charged battery is 420 miles (680 km) according to EPA tests. Under the E-Drive mode the car can attain a maximum speed of 150 km/h (93 mph). Two hybrid modes (Hybrid, and Race) use both the engine and electric motors to provide the desired levels of economy and performance. In Race mode a push-to-pass button initiates the Hot Lap setting, which delivers additional electrical power. The chassis is a carbon-fibre-reinforced plastic monocoque and the brakes used are electromechanical brakes. 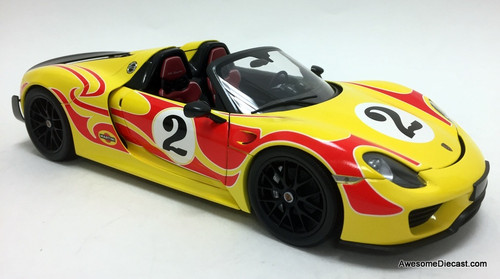