The Citroën DS is a front-engine, front-wheel-drive executive car that was manufactured and marketed by the French company Citroën from 1955 to 1975 in sedan, wagon/estate and convertible body configurations across three series/generations.

Noted for its aerodynamic, futuristic body design and innovative technology, the DS set new standards in ride quality, handling, and braking the latter as the first mass production car equipped with disc brakes.

The DS placed third in the 1999 Car of the Century poll recognizing the world's most influential auto designs and was named the most beautiful car of all time by Classic & Sports Car magazine.

Fantômas is a 1964 French comedy film starring Jean Marais as the arch villain Fantômas opposite Louis de Funès as the earnest but outclassed commissaire Paul Juve. In the film Juve teams up with journalist Fandor, also played by Marais, trying to catch Fantômas but never quite succeeding. It was France's answer, in 1964, to the James Bond phenomenon that swept the world at around the same time. It is the first film of a trilogy, and Fantômas became extremely successful in Europe, the Soviet Union and Japan. It found success even in the United States, where fan websites exist to this day. Mylène Demongeot plays "Hélène Gurn", the girlfriend of "Jérôme Fandor", Fantômas' arch enemy. The general tone of the films is more light-hearted than the original Fantômas novels. Commissaire Juve, as played by Louis de Funès, becomes a comedic character, much unlike his literary counterpart.

Fantômas is a man of many disguises. He uses mack-up as a weapon. He can impersonate anyone using an array of masks and can create endless confusion by constantly changing his appearance. In the first episode of the series he is unhappy with Fandor, because of a fictitious interview the journalist wrote about him. He takes his revenge by abducting Fandor and threatening to kill him. He then uses his formidable makeup skills to commit a spectacular crime while disguised like Fandor. When commissaire Juve joins the chase, chameleon-like Fantômas promptly commits a crime wearing a mask looking like Juve. In the end Fandor, Juve and Fandor's girlfriend Hélène are all on the master criminal's trail, all to no avail as the man of a thousand masks finally manages to escape. 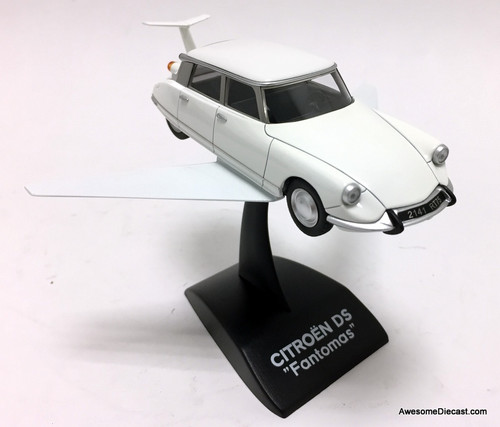