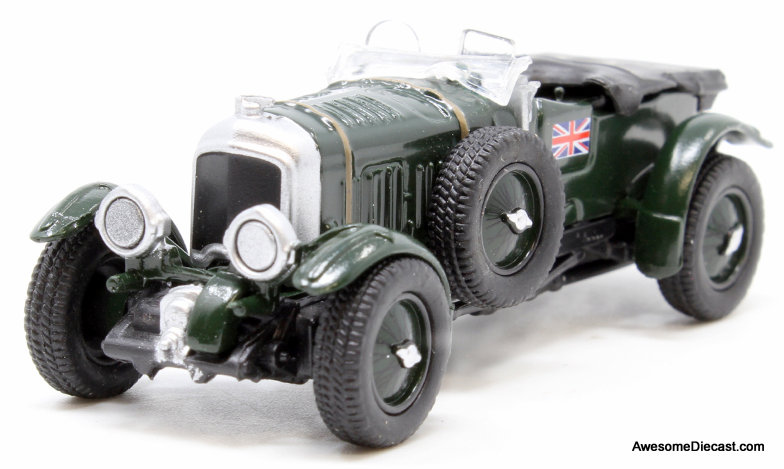 The Bentley 4½ Litre was a British car based on a rolling chassis built by Bentley Motors. Walter Owen Bentley replaced the Bentley 3 Litre with a more powerful car by increasing its engine displacement to 4.4 litres (270 cubic inches). A racing variant was known as the Blower Bentley.

Bentley buyers used their cars for personal transport and arranged for their new chassis to be fitted with various body styles, mostly saloons or tourers. However, the publicity brought by their competition programme was invaluable for marketing Bentley's cars.

At the time, noted car manufacturers such as Bugatti and Lorraine-Dietrich focused on designing cars to compete in the 24 Hours of Le Mans, a popular automotive endurance course established only a few years earlier. A victory in this competition quickly elevated any car maker's reputation.

A total of 720 4½ Litre cars were produced between 1927 and 1931, including 55 cars with a supercharged engine popularly known as the Blower Bentley. A 4½ Litre Bentley won the 24 Hours of Le Mans in 1928. Though the supercharged 4½ Litre Bentley's competitive performance was not outstanding, it set several speed records, most famously the Bentley Blower No.1 Monoposto in 1932 at Brooklands with a recorded speed of 222.03 km/h (138 mph).

Diecast metal with plastic parts   BT's origins date back to the founding of the Electric Telegraph Company in 1846 which developed a nationwide communications network. In 1912,...

The Ford Bronco is a model line of sport utility vehicles manufactured and marketed by Ford. The first SUV model developed by the company, five generations of the Bronco were sold from the 1966 to...

This is a limited edition model with only 333 pieces distributed world wide Made of resin it comes in an acrylic display case The Swabian car manufacturer Mercedes-Benz conceived the desire to...