The Dodge Charger (B-body) is a mid-size automobile that was produced by Dodge from 1966 to 1978, and was based on the Chrysler B platform.

The entire B-body lineup for the 1968 model year was redesigned and the Charger was further differentiated from the Dodge Coronet models. The first generation's efforts to look somewhat posh were abandoned in favor of designer Richard Sias' double-diamond coke bottle profile, with curves around the front fenders and rear quarter panels. Front and rear end sheet metal was designed by Harvey J. Winn. The rear end featured a "kick up" spoiler appearance, inspired by Group 7 racing vehicles. The fastback roof was gone, in favor of a "flying buttress" similar to that of the 1966-67 Pontiac GTO. The Charger retained its full-width hidden headlight grille, but a vacuum operated cover replaced the electric motor rotating headlights. The previous full-width taillights were replaced with dual circular units at the direction of Styling Vice President, Elwood P. Engel. Dual scallops were added to the doors and hood.

Inside, numerous "downscalings" were evident. A conventional fixed rear seat replaced the folding bucket seat design. The conventional trunk area included a vinyl mat, rather than the previous model's carpeted cargo area. The center console in the front remained, but there was no center armrest. The tachometer was now optional instead of standard and the electroluminescent gauges disappeared in favor of a conventional design.

A new high-performance package was added, the R/T ("Road/Track", with no 'and' between the two, as in the then highly influential, muscle car promoting Road & Track Magazine). The R/T came standard with the previous year's 440 "Magnum", with the 426 Hemi optional.

In 1968, Chrysler Corporation began an ad campaign featuring a cartoon bee with an engine on its back promoting models called the "Scat Pack". The Coronet R/T, Super Bee, Dart GTS, and Charger R/T received bumble-bee stripes (of two thin stripes framing two thick ones). The stripes were standard on the R/Ts and came in red, white, or black, but could be deleted at no extra cost.

The 1968 film Bullitt helped popularize the Charger R/T for its notable car chase sequence alongside the titular character's 1968 Ford Mustang GT through the streets of San Francisco, which has been regarded as one of the most influential car chase scenes in movie history. In the film, a black Dodge Charger R/T 440 is chased by Steve McQueen's Ford Mustang GT, jumping on the San Francisco slopes. The 1968 model year Charger sales increased to 96,100, including over 17,000 Charger R/Ts. 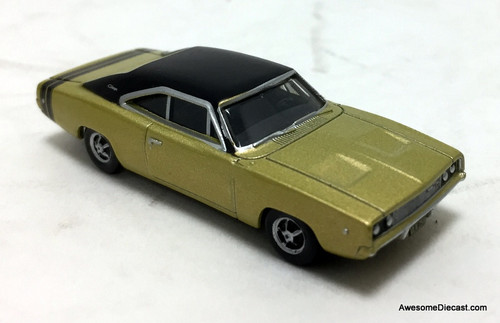