Jeffrey Tyler Burton (born June 29, 1967), nicknamed "The Mayor", is an American former professional stock car racing driver and current racing commentator. He scored 21 career victories in the Monster Energy NASCAR Cup Series, including two Coca-Cola 600s in 1999 and 2001 and the 1999 Southern 500. He currently serves as a color commentator for NBC Sports, having joined them upon their return to their coverage of NASCAR. His son Harrison Burton currently competes in the ARCA Menards Series and part-time in the NASCAR Camping World Truck Series. His brother Ward Burton and his nephew Jeb Burton have also competed in the Monster Energy NASCAR Cup Series.

In 1996, Burton was signed to Roush Racing, where he began driving the No. 99 Exide Batteries-sponsored Ford Thunderbird. In 1998, the team switched to the new Ford Taurus. He finished 13th overall in the season points standings despite failing to qualify for the Purolator 500 in March as a new team (provisionals in the first four races were based on 1995 points, and Burton's team did not have points from 1995). His career hit a peak from 1997 to 2000, as he never finished lower than fifth in the points standings. He achieved his first career win in 1997 in the Interstate Batteries 500 at Texas Motor Speedway (the inaugural NASCAR race at the track), and would go on to win 14 more races during the four-year run. In 1999, Burton won a career-high six races, including the Jiffy Lube 300 for a third straight year, and clinched two of the series' four majors: the Coca-Cola 600 and the 50th Annual Southern 500, which would lead to a fifth-place finish in points. His best points finish was in third in 2000, just 294 points behind champion Bobby Labonte. On September 17, 2000, Burton led every lap of the Dura Lube 300 at New Hampshire International Speedway, in unique circumstances (this race was the only Loudon race to use a restrictor plate, imposed for safety reasons after the deaths of Adam Petty and Kenny Irwin Jr. earlier in the year at the track). From 1997 to 2000, Burton won an event at NHIS every year.

In 2001, Burton and the No. 99 welcomed CITGO as a new sponsor. Burton won another two races, upping his career total to 17, and he finished tenth in points, climbing from a season low of 38th, which was his position after four races. In 2002 and 2003, he finished 12th in the points and had eight Top 5s and 25 Top 10s combined, but failed to win a race in either year. CITGO then announced that they were leaving Roush Racing at the end of the 2003 season.

Burton ran the 2004 season without a primary sponsor, with races frequently being sponsored by his personal sponsor SKF. Rumors began to arise that Burton would be leaving Roush Racing. After originally denying the rumors, it finally happened in mid-2004 when, just before the Sirius at The Glen, Burton signed a three-year contract with Richard Childress Racing (RCR), leaving Roush after eight and a half years with the team. 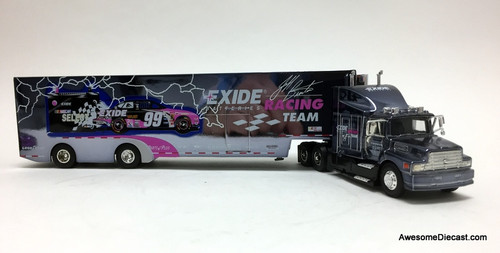