The Alfa Romeo Giulia (Type 952) is a compact executive car produced by the Italian automobile manufacturer Alfa Romeo. It was unveiled in June 2015, with market launch scheduled for February 2016, and it is the first saloon offered by Alfa Romeo after the production of the 159 ended in 2011. The Giulia is also the first mass-market Alfa Romeo vehicle in over two decades to use a longitudinal rear-wheel drive platform, since the 75 which was discontinued in 1992. The Giulia was second in 2017 European Car of the Year voting and was named Motor Trend Car of the Year for 2018.

The new Giulia was unveiled to the press at the Museo Storico Alfa Romeo in Arese, on 24 June 2015, at an event which involved only the top-of-the-range Quadrifoglio variant and a rendition of "Nessun dorma" by Italian tenor Andrea Bocelli. The occasion coincided with the company's 105th anniversary, and also saw the company debut a restyled logo for all future Alfa Romeo models. The Giulia was also presented under the new La meccanica delle emozioni slogan ("the mechanics of emotions" in Italian).

The Giulia uses a front-engine, rear-wheel-drive layout, featuring an even 50% front and 50% rear weight distribution. Suspension is independent all-around, of the double wishbone type at the front and multilink at the rear. All Giulia models employ a carbon-fibre drive shaft made by Hitachi Automotive Systems, as well as aluminium alloy shock towers, suspension components, front wings and doors. all-wheel drive models will also be offered.

The Polizia di Stato (State Police or P.S.) is one of the national police forces of Italy.

Alongside with Carabinieri, it is the main police force for providing police duties, primarily to cities and large towns, and with its child agencies it is also responsible for highway patrol (autostrade), railways (ferrovie), airports (aeroporti), customs (together with the Guardia di Finanza) as well as certain waterways, and assisting the local police forces.

It was a military force until 1981 when the Italian State Law 121 was passed. This converted the State Police to a civil force, which is in contrast to the other main police forces of Italy: the Arma dei Carabinieri, which is a military police (gendarmerie) force and the Guardia di Finanza, the Italian customs and border protection police that also falls in the military corps category.

The Polizia di Stato is the principal Italian police force for the maintenance of public security and as such it is run directly from the Dipartimento della Pubblica Sicurezza (Department of Public Security), and the keeping of public order (ordine pubblico). Interpol summarizes the primary focus of this force: "Its responsibilities include investigative and law enforcement duties, and the security of motorway, railway, and waterway networks". 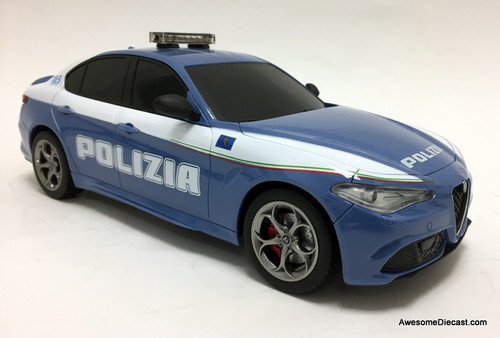