The Chevrolet Monte Carlo is a two-door coupe that was manufactured and marketed by Chevrolet from 1970 to 2007 model years (non-continuously), encompassing six generations. Chevrolet positioned the Monte Carlo as a personal luxury car, with the last generation classified as a full-sized coupé.

The first four generations of the Monte Carlo (1970–1972, 1973–1977, 1978–1980, and 1981–1988) were of a rear-wheel-drive, V8-powered (a V6 engine from 1978) coupe design, using body-on-frame construction. The later rear-wheel-drive generations did not incorporate the trend of uni-body construction that became more prevalent in the early 1980s as automakers downsized their vehicle lines to satisfy increasing demand for fuel-economy after the 1973 oil crisis and the early 1980s recession.

After the discontinuation of the rear-drive Monte Carlo after 1988, the nameplate was revived in 1994 for the fifth-generation, a front-drive, V6-powered coupe based on the Chevrolet Lumina sedan. The sixth and final-generation Monte Carlo from 1999 was built alongside the Chevrolet Impala, which succeeded the Lumina as Chevrolet's mid-sized sedan. The Monte Carlo SS was revived from 1999 to 2007, that was initially powered by 3.8 L V6 (supercharged in 2004 and 2005) and by a 5.3 L V8 for 2006 and 2007.

Green's 1990 Nashville Speedway USA championship led to his first foray in NASCAR. For several years, he raced part-time in the Busch Series before thriving as a full-time driver in 1995 and 1996. He then went through a two-year Cup stint with Diamond Ridge Motorsports and Felix Sabates.

Green returned to the Busch Series in 1999. In three seasons, he won the 2000 championship by 616 points, a series record which stood until 2006, and finished second twice. Green participated in IROC's 25th season in 2001, and has raced full-time with four different Sprint Cup teams since 2002.

Green dominated the field to win the 1990 track championship at Nashville Speedway USA. In 22 races, he won 15 times and had only one finish below third. After the season, John Boatman approached Green about competing in the Autolite Platinum 200, a NASCAR Busch Series event taking place at Richmond International Raceway. Green would start 23rd and finish 22nd in the event, exceeding the team's goal of simply qualifying for the race

Green ran a limited schedule from 1991–1994, sporadically appearing in Busch Series races and making Cup starts for Sadler Brothers and Junior Johnson in 1994. He became a full-time driver in the Busch Series in 1995 for Dale Earnhardt, Inc., and after consecutive top-five finishes in the points standings, he made a pair of Cup races for DEI in 1996. At the end of the season, he signed to drive the unsponsored No. 8 Chevy for Diamond Ridge Motorsports, and won his first career race at Las Vegas. He later made 20 Winston Cup series starts in 1997 for the No. 29 Cartoon Network Chevrolet Monte Carlo, owned by Diamond Ridge, finishing just behind his brother David for Rookie of the Year honors. Green planned to race full-time for the team in 1998, but only raced in the No. 29 for three of the first six races. He was later released by Diamond Ridge, who suspended operations for the Winston Cup team in an effort to focus on the Busch Series. Green substituted a race for Derrike Cope, and later signed a contract to drive the No. 46 First Union/The Money Store Chevrolet, owned by Felix Sabates, for the rest of the year. Overall, he would race in 22 of 33 season events and finished 40th in points. 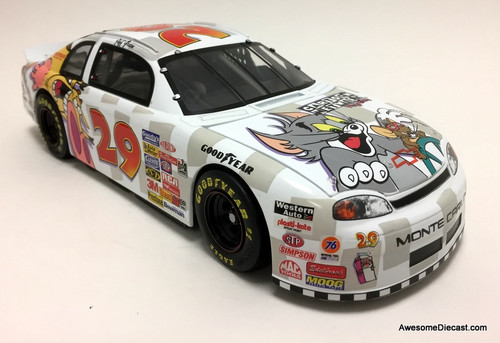