The Chevrolet Monte Carlo is a two-door coupe that was manufactured and marketed by Chevrolet from 1970 to 2007 model years (non-continuously), encompassing six generations. Chevrolet positioned the Monte Carlo as a personal luxury car, with the last generation classified as a full-sized coupé.

The first four generations of the Monte Carlo (1970–1972, 1973–1977, 1978–1980, and 1981–1988) were of a rear-wheel-drive, V8-powered (a V6 engine from 1978) coupe design, using body-on-frame construction. The later rear-wheel-drive generations did not incorporate the trend of uni-body construction that became more prevalent in the early 1980s as automakers downsized their vehicle lines to satisfy increasing demand for fuel-economy after the 1973 oil crisis and the early 1980s recession.

After the discontinuation of the rear-drive Monte Carlo after 1988, the nameplate was revived in 1994 for the fifth-generation, a front-drive, V6-powered coupe based on the Chevrolet Lumina sedan. The sixth and final-generation Monte Carlo from 1999 was built alongside the Chevrolet Impala, which succeeded the Lumina as Chevrolet's mid-sized sedan. The Monte Carlo SS was revived from 1999 to 2007, that was initially powered by 3.8 L V6 (supercharged in 2004 and 2005) and by a 5.3 L V8 for 2006 and 2007.

Terrance Lee Labonte (born November 16, 1956) is an American former stock car racing driver, and current racing commentator. A two-time NASCAR Monster Energy Cup Series (then Winston Cup Series) champion and 1989 IROC champion, he is the older brother of 2000 Winston Cup champion Bobby Labonte, and the father of former Nationwide Series driver Justin Labonte. He also co-owns a Chevrolet dealership in Greensboro, North Carolina with Rick Hendrick. He appeared on the CBS series The Dukes of Hazzard in 1984, where he played an unnamed pit crew member.

Terry Labonte was born in Corpus Christi, Texas in 1956. He was introduced to racing through his father, who had worked on race cars as a hobby for his friends. He started racing quarter midgets when he was seven and won a national championship at nine before moving onto the local short tracks in a stock car as a teenager. Driving on both dirt and asphalt, he won track championships in his hometown, in Houston, and in San Antonio from 1975 to 1977. During this time he also met Louisiana businessman Billy Hagan.

Labonte’s first NASCAR race came in 1978 at Darlington Raceway. He qualified 19th in the No. 92 Duck Industries-sponsored Chevrolet and finished fourth that weekend. He ran four more races that season and had an additional two Top 10 finishes. In 1979, he competed for NASCAR Winston Cup Rookie of the Year honors along with Dale Earnhardt, Harry Gant, and Joe Millikan while driving the No. 44 Stratagraph-sponsored Chevrolet for Hagan. Although Labonte failed to win the top rookie award, he was one of three rookies to finish in the Top 10 in points. He ended the season with 13 Top 10 finishes. The following year, he won his first career Winston Cup race on Labor Day weekend at Darlington. He won $222,501 in prize money for the year and finished eighth in the final points standings. In 1984, he appeared on the CBS series The Dukes of Hazzard, where he portrayed an unnamed pit crewman.

Labonte failed to return to victory lane over the next two years but didn't finish outside the Top 5 in the final standings. He won his second career race in 1983 in the Budweiser-sponsored Chevrolet. In 1984, his team received a sponsorship from Piedmont Airlines and he won races at Riverside International Raceway and Bristol Motor Speedway as well as clinching his first Winston Cup championship. He dropped to seventh in the final points in 1985. During that season, he made his Busch Series debut at Charlotte in the No. 17 Pontiac owned by Darrell Waltrip and won the 400 miles (640 km) race. Waltrip asked Labonte to drive after deciding to focus his driving priorities solely on Winston Cup racing during what would be Waltrip's 307-point gain over Bill Elliott in the final eight races of the 1985 season. 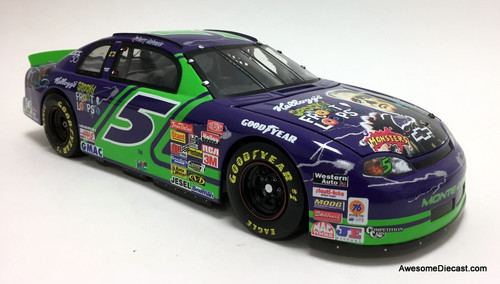