The K-700 is a four-wheel drive, heavy duty tractor from the former USSR and current Russian manufacturer of Kirovets

The tractor was manufactured in 1962, its basic design has been adopted in several subsequent models. The K-700s were also exported to the Comecon member—GDR imported K-700s starting from year 1968. The K-700 is a heavy four-wheel drive tractor-pulling force of 50 kN-class articulated and disconnectable rear wheel drive. The connecting piece of the front and rear frame part is movable about the vertical and the longitudinal axis, the steering takes place by lateral bending by means of hydraulic. It is powered by an 8-cylinder turbo diesel engine in V configuration with 215 HP. The K-700 1975 was the further development of K-700 A, including the disposal of the next larger fuel tanks (two tanks of 320 liter capacity) due to larger tires for better traction on. The K-700 A provided only a temporary solution. Also in 1975 a successor of K-700 appeared: the K-701. The K-701 has a 12-cylinder naturally aspirated diesel engine with 300 HP. The K-700 tractors were particularly large sized, handling well although the noise and vibration load on the driver was relatively high. In the GDR, its size in operations off the fields sometimes was cumbersome. Furthermore, the tractor's sheer size often resulted in soil degradation.

Kirovets tractors were imported to the United States and Canada for a time under the Belarus brand. They have recently been reintroduced under the MTZ brand.

K-700s and its variants are still used today in former east bloc countries. They are mostly referred as "Ka", because of the model prefix K. 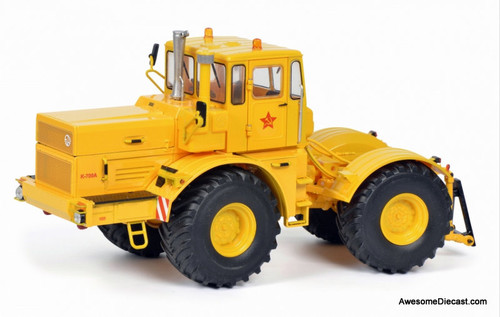