The Airbus A380 is the world's largest passenger airliner, a wide-body aircraft manufactured by Airbus. Airbus studies started in 1988 and the project was announced in 1990 to challenge the dominance of the Boeing 747 in the long haul market. The A3XX project was presented in 1994; Airbus launched the €9.5 billion ($10.7 billion) A380 programme on 19 December 2000. The first prototype was unveiled in Toulouse on 18 January 2005, with its first flight on 27 April 2005. Difficulties in electrical wiring caused a two-year delay and the development cost ballooned to €18 billion. It obtained its EASA and FAA type certificates on 12 December 2006.

It was first delivered to Singapore Airlines on 15 October 2007 and entered service on 25 October. Production peaked at 30 per year in 2012 and 2014. However, Airbus concedes that its $25 billion investment for the aircraft cannot be recouped. On 14 February 2019, after Emirates reduced its last orders in favour of the A350 and the A330neo, Airbus announced that A380 production would end by 2021.

The full-length double-deck aircraft has a typical seating capacity of 525, though it is certified for up to 853 passengers. It is powered by four Engine Alliance GP7200 or Rolls-Royce Trent 900 turbofans providing a range of 8,000 nmi (14,800 km). As of December 2019, Airbus has received 251 firm orders and delivered 242 aircraft; Emirates is the biggest A380 customer with 123 ordered, of which 115 have been delivered.

Major structural sections of the A380 are built in France, Germany, Spain, and the United Kingdom. Due to the sections' large size, traditional transportation methods proved unfeasible, so they are brought to the Jean-Luc Lagardère Plant assembly hall in Toulouse, France, by specialised road and water transportation, though some parts are moved by the A300-600ST Beluga transport aircraft. A380 components are provided by suppliers from around the world; the four largest contributors, by value, are Rolls-Royce, Safran, United Technologies and General Electric.

For the surface movement of large A380 structural components, a complex route known as the Itinéraire à Grand Gabarit was developed. This involved the construction of a fleet of roll-on/roll-off (RORO) ships and barges, the construction of port facilities and the development of new and modified roads to accommodate oversized road convoys. The front and rear fuselage sections are shipped on one of three RORO ships from Hamburg in northern Germany to Saint-Nazaire in France. The ship travels via Mostyn in the United Kingdom, where the wings are loaded. The wings are manufactured at Broughton in North Wales, then transported by barge to Mostyn docks for ship transport.

In Saint-Nazaire, the ship exchanges the fuselage sections from Hamburg for larger, assembled sections, some of which include the nose. The ship unloads in Bordeaux. The ship then picks up the belly and tail sections from Construcciones Aeronáuticas SA in Cádiz in southern Spain, and delivers them to Bordeaux. From there, the A380 parts are transported by barge to Langon, and by oversize road convoys to the assembly hall in Toulouse. To avoid damage from direct handling, parts are secured in custom jigs carried on self-powered wheeled vehicles.

After assembly, the aircraft are flown to Hamburg Finkenwerder Airport (XFW) to be furnished and painted. Airbus sized the production facilities and supply chain for a production rate of four A380s per month

In February 2019, Airbus announced it will end the A380 production by 2021, after its main customer, Emirates, agreed to drop an order for 39 of the aircraft, replacing it with 40 A330-900s and 30 A350-900s. Airbus will build 17 more A380s before closing the production line – 14 for Emirates and three for All Nippon Airways – taking the total number of expected deliveries of the aircraft type to 251. Airbus would have needed more than $90 million from the price of each aircraft to cover the estimated ~$25 billion development cost of the programme. However, the $445 million price tag of each aircraft was not sufficient to even cover the production cost, so with Airbus losing money on each A380, and orders evaporating, it makes economic sense to shut down production. Enders stated on 14 February 2019, "If you have a product that nobody wants anymore, or you can sell only below production cost, you have to stop it.

Due to its modern engines and aerodynamic improvements, Lufthansa's A380s produce half the noise of the Boeing 747-200 while carrying 160 more passengers. In 2012, the A380 received an award from the Noise Abatement Society.

London Heathrow is a key destination for the A380. The aircraft is below the QC/2 departure and QC/0.5 arrival noise limits under the Quota Count system set by the airport. Field measurements suggest the approach quota allocation for the A380 may be overly generous compared to the older Boeing 747, but still quieter. Rolls-Royce is supporting the CAA in understanding the relatively high A380/Trent 900 monitored noise levels. Heathrow's landing charges having a noise component, the A380 is cheaper to land there than a Boeing 777-200 and -300 and it saves $4,300 to $5,200 per landing, or $15.3M to $18.8M of present value over 15 years. Tokyo Narita has a similar noise charge.

Sufficient braking capacity allowed for thrust reversers to be installed on only the inboard engines. The outboard engines lack them, reducing the amount of debris stirred up during landing. The reversers are electrically actuated to save weight, and for greater reliability than pneumatic or hydraulic equivalents.

As of 2016 the list price of an A380 was US$432.6 million.[319] Negotiated discounts made the actual prices much lower, and industry experts questioned whether the A380 project would ever pay for itself.[90] The first aircraft was sold and leased back by Singapore Airlines in 2007 to Dr. Peters for $197 million.[320] In 2016, IAG's Willie Walsh said he could add a few, but also that he found the price of new aircraft "outrageous" and would source them from the second-hand market.[299] 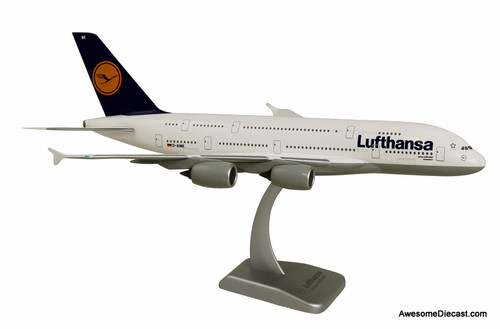