For 1967, the GT350 carried over the K-Code high performance 289 with a 'COBRA' aluminum hi-rise. The GT500 was added to the lineup, equipped with a "Ford Cobra" FE Series 428 cu in (7.0 L) V8 engine with two 600 CFM Holley four-barrel carburetors sitting atop a mid-rise aluminum intake manifold.

Documented plans to introduce a convertible mid-production year were shelved due to supply, production and financial problems that happened as soon as the first cars started to arrive at Shelby's Los Angeles facility in September. By October 1966, Ford took control over engineering and purchasing. A.O. Smith was tapped to fix the fiberglass fitment[17] and quality problems. Six months later, in May 1967, the decision was made to terminate the California-based Shelby operation. On August 18, 1967, a small staff, along with the remaining engineering cars, was sent to Ionia. The small staff of the newly formed Shelby Automotive, Inc. had substantially less involvement after this time.

Notable cars for 1967 include:

0100, the first GT500 built.
0131, the only Shelby GT coupe built ("Little Red'), which was the precursor to the '68 California Special. The original "L'il Red" was rediscovered in a Texas farm field in March 2018
0139, the only Shelby GT500 convertible built (in 1967) Note: cars 0100, 0131 and 0139 were the first big block Shelby GT cars ordered and built.
One 1967 Fastback was updated to a GT500 equipped with a 427 FE GT40 racing engine producing 650 hp (485 kW), and was known as the "Super Snake" The car was capable of speeds over 150 mph (241 km/h); hitting 170 mph (274 km/h) during a demonstration (by Shelby himself) of Goodyear's Thunderbolt tires. No cars other than the prototype were built due to limited interest. The car sold at Mecum's 2013 Indianapolis auction for $1.3 million.
For 1968, the Cobra name was applied to both models, and they were now marketed as the Shelby Cobra GT350 and the Shelby Cobra GT 500. The solid lifter K-code engine was discontinued by Ford so Shelby used the hydraulic lifter 230 hp 302. It produced 250 HP with the high rise intake but was not equipped with Shelby headers in order to make room for power steering. The early 1968 GT500 used the Shelby installed 428 Police Interceptor with a single four barrel carburetor rated at 360 HP. 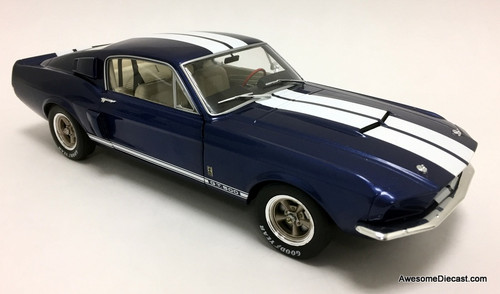