In 1939 Dodge presented a completely new designed line of pickups and trucks, with streamlined, art-deco styling front sheetmetal. Introducing the concept of "Job- Rated", Dodge tried to offer customers the truck that fit the job they were buying it for. As a result, the Dodge pickup / truck range from 1939 onwards offered an exceptionally large number of available variants — six different payload ratings, a wide range of bodies, more than twenty different wheelbase-lengths were manufactured, and fitted with different sized versions of the Chrysler-sourced inline six-cylinder side-valve engines — from the half-ton TC pickup on a 116-inch wheelbase to three-ton tractor cabs. Nevertheless, mechanically, the trucks were all very similar, with solid axles front and rear and leaf springs at all four corners. With World War II taking up most of production capacity from 1942 to 1945, the 1939 styling continued largely unchanged through 1947, as engineering and production became the main focus.

The Dodge trucks enjoyed some popularity before the war, and the last of them built in 1942, before Dodge turned to mostly military production, had progressed to the W-series model name. When they resumed sales post-war, they continued as the 1946 Dodge W-series.

Sunlight is a brand of dishwashing deteregent manufactured and marketed around the world by Unilever, except in the United States and Canada, where became owned by Sun Products (now Henkel Corporation) since 2008

Sunlight household soap was introduced by the British company Lever Brothers in 1884. It was the world's first packaged, branded laundry soap. Designed for washing clothes and general household use, the success of the product led to the name for the company's village for its workers, Port Sunlight. The soap formula was invented by a Bolton chemist named William Hough Watson, who also became an early business partner. Watson's process created a new soap, using glycerin and vegetable oils such as palm oil rather than tallow (animal fats). William Lever and his brother James Darcy Lever invested in Watson's soap invention and its initial success came from offering bars of cut, wrapped, and branded soap in his father's grocery shop. This was an early labour-saving device for the housewife as prior to this, commercially made soap was bought in long bars. Sunlight soap was eventually supplanted by modern products made from synthetically produced detergents rather than naturally derived soaps.

In 1971, the company rebranded Sunlight as a washing-up liquid in the UK. The new packaging for Sunlight Lemon Liquid had a large picture of a lemon, and only featured the words "washing up liquid" in small letters. There were complaints that children might mistake the product for lemon squash and drink it. The matter was discussed in the House of Lords. The company responded by changing its packaging.

In several markets (e.g., Belgium and the Netherlands) Sunlight soap has survived as a personal wash product rather than a laundry detergent.

Sunlight is still used in some markets as a brand by Unilever (the successor of Lever Brothers). In Sri Lanka, Sunlight laundry soap has a market share of more than 75%, and won the “brand of the year” award in 2004. In South Africa, the brand is used for bath soap, dishwashing liquid, washing powder and fabric conditioner.

The brand was also used in the Philippines during the 1990s as detergents. It was discontinued until it was revived in 2015 as a liquid dish-washing detergent traded alongside the Surf line.

However, production for Ireland and the UK ceased in 2009 due to low demand; it is available only as an import. In Norway it was taken over by Lilleborg in 1930.

In 2003, exclusive licensing rights to the Sunlight brand for dishwashing detergents in the United States, Canada, Puerto Rico were sold along with several Unilever brands to Lehman Brothers Merchant Banking Group, which established Phoenix Brands LLC for the purpose. In 2008, the North American trademark rights to Unilever laundry brands including Sunlight were acquired by Sun Products Corporation. In early 2010, Sun Products acquired the American and Canadian business rights to the Sunlight brand.

The Sunlight brand was used by JohnsonDiversey Professional Products in Canada and the USA in 2011.

In Australia, it is a brand of Symex, who manufacture, distribute and export Sunlight bar soap and Sunlight dishwashing liquid.

In Turkey in the summer of 2010, washing-up liquids produced under the brand Cif began marketing with the new compound brand Sunlight Cif. As well as the regular liquid, a concentrated washing-up liquid was introduced in three varieties (lime, lemon and orange); when it comes into contact with water, it turns into a gel which remains in the sponge longer than regular washing-up liquid. 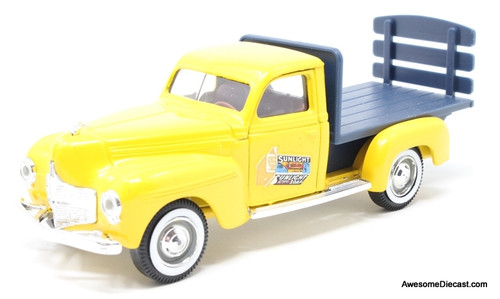