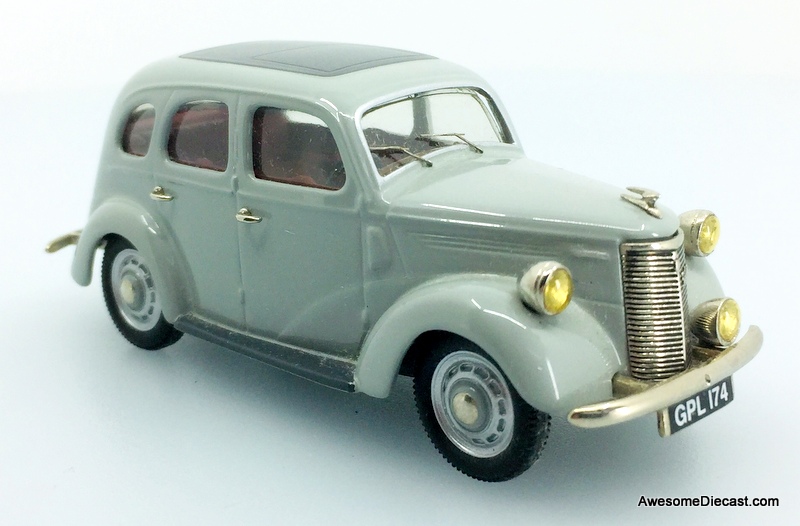 This is an extremely rare Somerville model hand made in England in 1999..

The Ford Prefect is a line of British cars which was produced by Ford UK between 1938 and 1961 as an upmarket version of the Ford Popular and Ford Anglia small family cars. It was introduced in October 1938 and remained in production until 1941. Returning to the market in 1945, it was offered until 1961. The car progressed in 1953 from its original perpendicular or "sit-up-and-beg" style to a more modern three-box structure. Some versions were also built and sold by Ford Australia.

Like its siblings, the car became a popular basis for a hot rod, especially in Britain, where its lightweight structure and four-cylinder engines appealed to builders.

The Ford Prefect was introduced in October 1938 and built by the Ford plant in Dagenham, Essex. The original Ford Prefect was a slight reworking of the previous year's 7W, the first Ford car designed outside of Detroit, Michigan. It was designed specifically for the British market. It had a 1,172 cc (71.5 cu in) side-valve engine with thermosiphon cooling system (no pump) and with many other cars of the period, the ability to be started by a crank handle should the battery not have sufficient energy to turn the 6-volt starter motor. The windscreen wipers were powered by the vacuum ported from the engine intake manifold — as the car laboured uphill the wipers would slow to a standstill due to the intake manifold vacuum dropping to near nil, only to start working again as the top was reached and the intake vacuum increased. The windscreen opened forward pivoting on hinges on the top edge; two flaps either side of the scuttle also let air into the car. The car has a durable four-cylinder motor.

Made from diecast metal. Comes in its original box.

This is a highly collectible detailed resin model The Cunningham team bought three 1960 Corvettes from Don Allen Chevrolet, each was optioned to the gills with every performance tweak available...

This model is part of the USA exclusive series Shelby American, founded by the late great Carroll Shelby, has long been providing Ford Mustang and F-150 truck owners with special editions and...

This is a limited edition model with only 143 pieces produced world wide Throughout automotive history, there have been a number of machines that so perfectly suited their purpose that they came to...