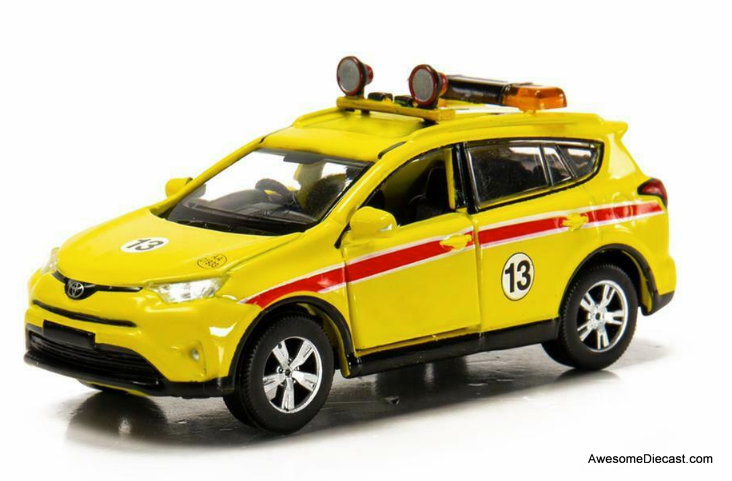 The Toyota RAV4, is a compact crossover SUV (sport utility vehicle) produced by the Japanese automobile manufacturer Toyota. This was the first compact crossover SUV, it made its debut in Japan and Europe in 1994, and in North America in 1995, being launched in January 1996. The vehicle was designed for consumers wanting a vehicle that had most of the benefits of SUVs, such as increased cargo room, higher visibility, and the option of full-time four-wheel drive, along with the maneuverability and fuel economy of a compact car. Although not all RAV4s are four-wheel drive, RAV4 stands for "Recreational Activity Vehicle: 4-wheel drive", because the aforementioned equipment is an option in select countries.

The first generation RAV4, known as the XA10 series was constructed on a unique platform that shared Carina and Corolla elements. It launched in Japan in May 1994. Design and development commenced in 1989 under code-name 153T, with design approval and start of production development in the second half of 1991 on the 3-door version and in 1993 for the 5-door version. In March 1995, the 5-door was launched and introduced to the US in January 1996, with standard dual airbags.

The XA10 series was available in both three and five door versions. In the US, a 2.0-liter straight-four producing 89 kW (119 hp; 121 PS) was available. Both front-wheel drive and all-wheel drive were available, and the RAV4 could be had with either a five-speed manual or four-speed automatic transmission. It was named the 1997 Automobile of the Year by Automobile Magazine. The 1996-1997 model years had headlamps with a bracket push in type, dual filament bulb. The front running/turn signal lamps used older round socket dual filament bulbs. The rear used round socket type bulbs as well. In 1997 for the 1998 model year, the RAV4 was slightly restyled on the front and rear fascias, and a soft top three-door was made available. Power was increased slightly to 95 kW (127 hp; 129 PS). In June 1999, the two-door hardtop was dropped from the American lineup, leaving the five-door and soft top models. The 1998-2000 models used a single filament headlamp, with two different beams per housing (low and high beam) opposed to the original single beam with dual filaments. The rear lamps use the more modern rectangular style bulbs (7440/7443). The interior has subtle changes such as different colored seats, different colored door panels, extra cup holders on certain models (cigarette lighter/cup holder duo), and a digital odometer. In Japan, the 2.0-liter 3S-GE BEAMS engine with 132 kW (177 hp; 179 PS) was also available. Some variants of the 1998 Toyota RAV4 were labeled as SXA11 rather than XA10, paired with an owner given name of "RAV 4.1".

Some models were manufactured without a digital clock but a plastic cover instead. However the wiring for the clock is still behind the dash, thus a clock can be installed in models sold without.

The Toyota RAV4 was redesigned for the 2006 model year, using an all-new platform and was first unveiled at the 2005 Frankfurt Motor Show. The new RAV4 uses an Electric Power Steering (EPS) system.

The third generation RAV4 is offered in two versions: a short- or a long-wheelbase model. The short-wheelbase model is sold only in Japan, Europe and New Zealand (diesel only in NZ), with the long-wheelbase RAV4 sold in Australia, New Zealand and North America. Since 2007, the extended-length RAV4 is also sold alongside its shorter counterpart in Japan as the Toyota Vanguard, albeit with a revised front-end body work incorporating a revised grille, bumper, bonnet and headlamps. When the larger XA40 arrived in 2012, the short wheelbase model was kept in production for the Japanese market and sold instead of the new version until 2016.

Japanese models went on sale in 2005 at Toyota NETZ dealers. The 3-door was dropped in the beginning of 2007, leaving Toyota without a mini SUV until the 2009 Toyota Urban Cruiser, which is sold in Europe, North America (as the Scion xD) and Japan (as the Toyota ist). The XA30 series RAV4 was sold in Japan until July 2016, where the XA40 is not to be offered. Toyota discontinued the Vanguard in November 2013 in favour of the redesigned XU60 Harrier. As the RAV4 continued to grow, it became expensive to own in Japan due to the exterior dimensions and engine displacement placing it in the upper tax bracket as defined by Japanese government dimension regulations and annual road tax obligations.

It is also the first generation of RAV4 to be offered in regular (for Asian and European markets, dropping the spare wheel from the rear) and extended (for North American and Australian markets) versions. The extended-length RAV4 is larger by 21% in interior volume from the last generation and now has an available third-row seat for children (North America and Japan only). The RAV4 can still be had in either front-wheel-drive or all-wheel-drive in North America and Japan; however most countries only sell the all-wheel-drive version.

In 2008 (for the 2009 model year) RAV4 was given a mid-cycle refresh in some markets, featuring a number of changes, including an all-new four-cylinder engine, and a redesigned front end and tweaked rear end. The Limited model gets a different front grille and bumper cover from other models. The Sport model features a bigger spoiler and red badging along with an option on the V6 model to have a rear door without the externally mounted spare tire (run-flat tires are used on this model). New features/options include turn signals integrated into the side mirrors, backup camera (with monitor built into rear-view mirror), satellite navigation, smart keyless entry, a push button starter, a multi-function instrument cluster display, etc. Much of the interior remains as before. In 2009, it was also the first time for the Canadian market to have a 2WD model sold in Canada.

The vehicles were built in Toyota's Tahara, Aichi assembly plant, and under contract by Toyota Industries in its Nagakusa, Obu, Aichi plant. Beginning in November 2008, vehicles for the North American market were built in the Toyota Motor Manufacturing Canada Inc., Second Plant. Beginning in March 2009, Chinese models began production by Tianjin FAW Toyota Motor Co. Ltd. in a joint-venture plant in Tianjin, China.

In 2015, the XA30 series RAV4 was awarded the WheelsTV pre-owned vehicle of the year title.

The BMW i3 is a B-class, high-roof hatchback manufactured and marketed by BMW with an electric powertrain using rear wheel drive via a single-speed transmission and an underfloor Li-ion battery pack...

The BMW i3 is a B-class, high-roof hatchback manufactured and marketed by BMW with an electric powertrain using rear wheel drive via a single-speed transmission and an underfloor Li-ion battery pack...

The Peugeot 404 is a large family car produced by French automobile manufacturer Peugeot from 1960 to 1975. A truck body style variant was marketed until 1988. The 404 was manufactured under licence...