The Nissan NV200 is a light, commercial and leisure activity, 4/5-door van designed and produced by the Japanese automaker Nissan since 2009 (2010 model year).

Available in Combi and passenger car versions, NV200 was built on a modified version of Nissan's B Platform, with fully independent strut type front suspension mounted on a separate subframe and a leaf spring rear axle.

The vehicle was unveiled at the 2009 Geneva Motor Show, followed by 2010 Beijing International Automobile Exhibition. The vehicle went on sale in Japan before summer 2009, followed by Europe in autumn 2009 and then in China and other markets.

As of February 1, 2019, Nissan has announced discontinuing production of NV200, only electric model e-NV200 remains in production with good customer demand after 40kWh-model release. Nissan intends to release a new model with Renault called NV250, which will be sibling of Renault Kangoo, which is expected to be EV too.

This is a version of Nissan NV200 with 2.0L 4-cylinder engine, a low-annoyance horn with exterior lights that indicate when the vehicle is honking, sliding doors with entry step and grab handles, transparent roof panel (with shade), independently controlled rear air conditioning with a grape phenol-coated air filter, breathable, antimicrobial, environmentally friendly and easy-to-clean seat fabric that simulates the look and feel of leather; overhead reading lights for passengers and floor lighting to help locate belongings, a mobile charging station for passengers that includes a 12V electrical outlet and two USB plugs, a six-way adjustable driver's seat that features both recline and lumbar adjustments, even with a partition installed; standard driver's navigation and telematics systems; front and rear-seat occupant curtain airbags, as well as seat-mounted airbags for the front row; standard traction control and Vehicle Dynamic Control (VDC), lights that alert other road users that taxi doors are opening. 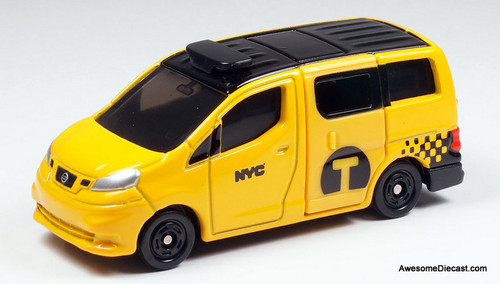