The mirrors for this model are included in the box! Snozzle boom raises and lowers.

The Rosenbauer Group is one of the world’s three largest manufacturers of fire-service vehicles and firefighting equipment, based in Leonding, Austria.

Rosenbauer supplies the fire fighting sector in over 100 countries with a wide range of custom fire and rescue apparatus and services. It produces its extensive series of fire fighting vehicles and aerials in three continents, to both European and US standards.

The first Austria-wide firefighting enterprise was founded by Johann Rosenbauer in Linz in 1866. Beside manual fire pumps from different manufacturers, helmets, buttons and so on, the company was also selling equipment for fencing, sports and playgrounds. Konrad Rosenbauer took over the company in 1888, a turning point from which it would manufacture its own fire extinguishing equipment. After moving to a larger site, the company traded its name for K. Rosenbauer & Kneitschel, Fabrik für Lösch- und Wehrgerät und Metallwaren.

In 1908, Rosenbauer started producing gas-powered pumps. The first fire truck was built 1918. In 1926, the new Automobilspritzengesellschaft Lohner & Rosenbauer shipped its first vehicle to China. From 1930 onward, Rosenbauer was also able to produce its own two-stroke engines (today, engines are provided by others, notably BMW and Volkswagen).

The company had a production site in Iran, until the fall of the Shah.

Since the 1970s, Rosenbauer has collaborated with Carvatech, for the manufacture of firefighting vehicle bodies.

In the middle of the 1980s, Rosenbauer introduced the Falcon, a vehicle which had a chassis developed especially for firefighting vehicles. The Falcon, with many custom and unproven parts, was prone to failures and long down-time, dooming custom chassis apparatuses to failure in Europe.

The eight-wheel drive version accommodates 14,500 litres (3,830 gallons) of fire extinguishing agents and a maximum speed of 140 km/h (87 mph), with an operating weight of 40 tons. 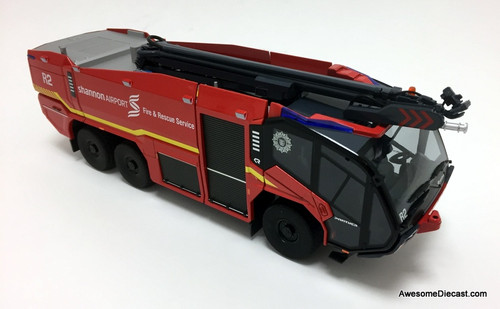