These models are sold in blister packets

The Alfa Romeo Romeo was a light commercial, cabover van and pickup truck that was introduced by the Italian automaker Alfa Romeo in 1954 as the Alfa Romeo Autotutto ("all purpose"). The line of vans continued to be built until 1983, when it was replaced by relabelled Fiat and Iveco commercials.

The first Alfa Romeo T10 "Autotutto" ("all purpose") was presented in 1954 Turin Motor Show as panel and minibus version. Later more versions came available as Alfa Romeo made themselves with very many body versions: van, high roof van, "Promiscuo" (van with additional side windows and rear seating), minibus, school bus, ambulance, pick-up, drop-side truck and double cab truck. In addition to this many coachbuilding companies made their own versions. The van used the 1,290 cc Alfa Romeo Twin Cam straight-four engine detuned to 35 bhp (26 kW) and it had top speed of 60 mph (97 km/h). This engine was later used on Giulietta Berlina. The optional two-cylinder supercharged diesel engine had 30 bhp (22 kW).

The updated Romeo 2 version was introduced in 1954, it was assembled in Italy and also built under license in Spain by FADISA (Fabricacion de Automoviles Diesel S.A.), this Spanish version had a 1.6 liter Perkins 4/99 diesel engine and a gearbox with synchro on all forward gears. 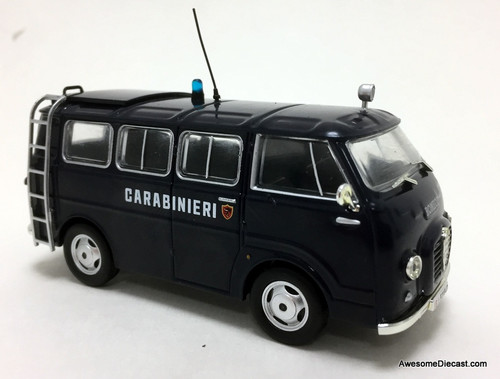